10 Books of Latvian poetry to go down in history

10 Books of Latvian poetry to go down in history 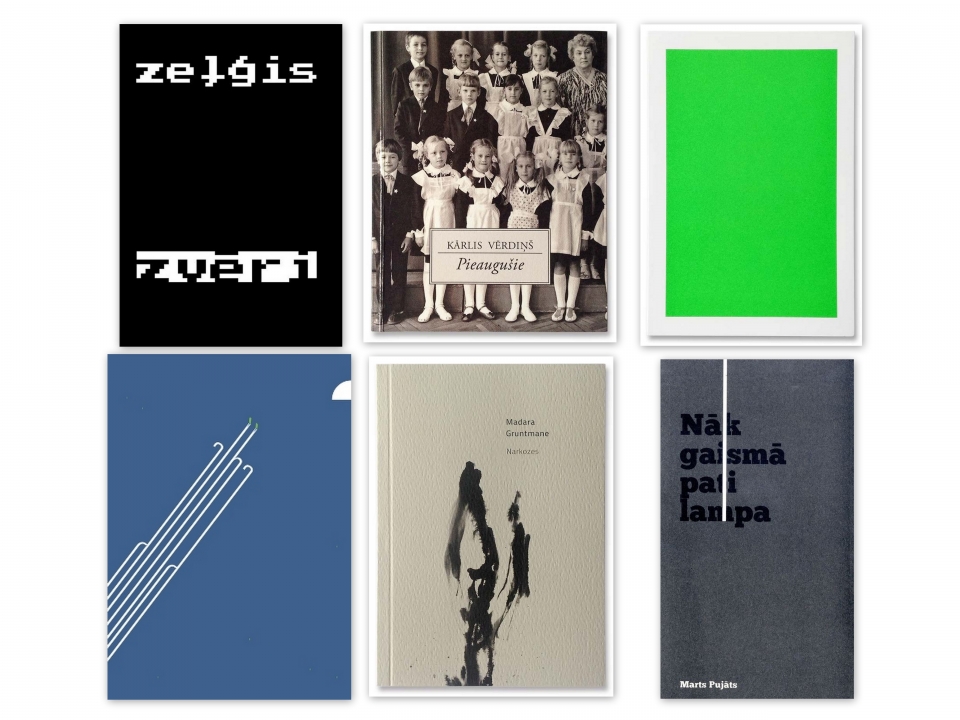 Latvia along with the other Baltic States – Lithuania and Estonia, participated in the London Book Fair this August as the Market Focus countries. To honour the occasion, over 40 books of Latvian literature altogether will be translated into English and published by British publishing houses this year. To celebrate these books, the Latvian Literature platform is putting out a series of articles listing some of the best works – this time, our top collections of poetry. Many of these are already available to the readers in Great Britain and other English-speaking countries.

Latvia’s participation in the London Book Fair is one of the most significant events celebrating Latvian Centenary abroad.

Seeing Kārlis Vērdiņš (1979), let’s say, walking down the street or on the suspension bridge crossing the Daugava River, joyfully riding his scooter, you might be convinced that this poet has been an adult for at least a decade. However, it turns out that he waved goodbye to his adolescence only recently – with his latest collection of poems “Adults”. This goodbye message happened to be so brilliant that it earned Vērdiņš the Annual Latvian Literature Award. Vērdiņš’ primary school class photo is on the cover, and the first verse warmly greets the reader: “Good evening, our little friend!”

Kārļa Vērdiņš’ selection of poems “Come to me” was published in English by the British “Arc Publications”.

In case you stumble upon Annas Auziņa’s (1975) bright (both literally and figuratively) book of poems titled “Anna's Dowry Cow” and happen to open in right in the middle, don’t be spooked. No, this is not one of Agnese Kleina’s notebook planners full of marker pen doodles of a teenage girl. This is conceptual poetry! The book is a mature woman’s dowry – it is Anna's Dowry Cow. Full of just the most important things. This dowry is special in a couple of ways: its owner will never lie, and openly admits: “Tonight I will be drinking”. And such openness is disarming: “But God loves everyone [...] I am loved by God. So are all the drunks.”

“Cake Mary” is not just a song by “Sigma” which you might have heard played by one of the Latvian radio stations or seen accompanied by Katrīna Neiburga’s music video. “Cake Mary” is the title poem of the excellent poet Inga Gaile’s (1976) third collection of poems   which earned her the Poetry Days award. Gaile’s writing is clever, sensual and at times painfully precise, as a splinter: “love skates across the ice / carrying carnations and a chainsaw”.

Marts Pujāts’ (1982) poetry is often compared to maths equations, and the poet also admits that his poetry has not one redundant word – everything is precise, down to the last detail. His latest collection “The lamp itself comes to light” received the lamp statue at the Annual Latvian Literature Award ceremony. In this book, Pujāts uses word play to lure the reader into a world of his creation, intellectually moving and breathtakingly surprising as  “from out of a lilac twig, water lucias take wing ”.

“The Room” is one of the two collections of poetry thus far published by the talented Latvian poet Arvis Viguls (1987). Viguls was named among the ten most interesting European authors at the London Book Fair last year. “The Room” is an impressive debut collection that surprised many poetry lovers and earned its author not only the Poetry Days award but also the prestigious Annual Latvian Literature Award. This refined and multi-layered book of poems takes you on a journey through a room of bohemian poet lifestyle, as well as through the entire history of world poetry.

Arvja Viguls’ collection of poems is to be published in Great Britain by “Valley Press”.

“Photograph and Scissors” is the second out of three collections by Artis Ostups (1988). Ostups’ voice will attract connoisseurs of intellectual poetry – it grabs you with its poetic language and illuminates intimate occurrences. The reader’s readiness to immerse him- or herself into and get to know this world is essential when encountering Ostups’ prose poems – fine, emotional and technically precise. Are you ready to meet one of the most impressive poets of the younger generation? You are welcome to do it here: on the Night Express, at the Childhood Academy, the Pain Colloquium.

Arta Ostupa collection “Gestures” is to be published in Great Britain by “Ugly Duckling”.

“alba”, a pocket-size book bound by thread, is the second collection of poems by the renowned poet and translator Ingmāra Balode (1981). It earned the author her second Annual Latvian Literature Award. As the cover of the book will let you know – alba is the troubadour’s morning song. Not merely the word itself, but the entirety of Balode’s poetry announces the arrival of the sun and the white colour that lightly and just a little bit sorrowfully testifies to the gentle inevitability: “from now on, I am to live on my own”.

Laconic in both its design and title “Beasts” is the second collection of poems by the Latvian poet Krišjānis Zeļģis (1985). Who said that poetry must be complicated or sophisticated? Zeļģis’ poems are fascinating for how simple and, yes, even boring they are, stuck in everyday hassle where nothing really ever happens. It might be, however, that it is precisely this boredom, stagnation and trials and tribulations that will reveal something close and familiar to the reader. The younger generation might recognize their brothers and sisters among the characters of the book: “I have arrived in an empty frozen backyard / only this time it’s a quieter doodah /I sit on a mattress nibbling / on a yellow half-pill of Paracetamol”.

“Orbita” is a group of Latvian-Russian poets actively involved in poetry events and readings in Latvia and abroad since 1999, and publishing works of poetry and art. One of such works is the Almanac “Orbita”, which has received the Annual Latvian Literature award. “Orbita” is particularly fascinating for their multimedial approach, combining poetry, music and video in one almanac, published in DVD and CD format, with both Latvian and English translations made available. The almanac includes works by poets like Artur Punte, Semyon Khanin, Sergey Timofeyev, Zhorzh Uallik, et al, as well as artists such as the singer and DJ Roberts Gobziņš, and artists Katrīna Neiburga and Voldemārs Johansons.

“Orbīta” collection of poems is to be published in the UK by “Arc Publications”.

“Narcoses” is the first book of poems by Madara Gruntmane (1981) that immediately put the poet on the map and placed her among the nominees for the Latvian Literature award. Her rough and psychologically precise poetry, the naturalist way of reflecting upon events and experiences might be off-putting or annoying to someone, but it will also undeniably captivate with its openness and directness, even crudeness: “squeeze me in a buckwheat field/ don’t be a pussy”.

Madaras Gruntmane’s collection of poems “Narcoses” was published this year in the UK by “Parthian Books”.