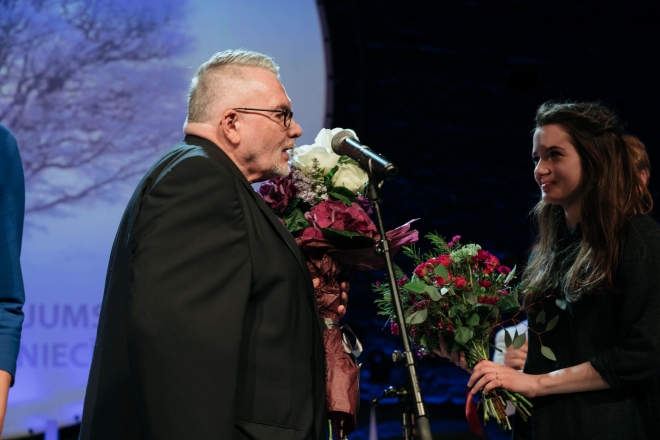 Poet and translator Uldis Bērziņš is a prolific figure in Latvian literature, an idol to many poets, writers, and readers world-wide. It is next to impossible to describe his unique contribution to the literary voice of Latvia. His work in poetry translation has notably informed and shaped the tradition. Bērziņš is not simply a poet, he is recognised as a virtuoso of words, a visionary able to see and create connections between different points all across the world cultures through his deep understanding of faith, rituals, humanity and humility. He has translated poems from many languages, including Turkish, Persian, Spanish, English, Polish, Swedish, Russian and Old Icelandic. And he has worked on various translations of grand scale, including the most recent translation into Latvian of the Bible, as well as the translation of the Qur'an. This year he recieved the Lifetime Achievement Award at the Annual Latvian Literature Award ceremony.

What is it like to receive a Lifetime Achievement Award?

I should say - uneasy? uncertain? An award — for me? Why not you, You – you? It is different when your book happens to be the best one in an open contest. This time I miss the fear, the unknowing, so useful when tilting at windmills, or bloated wineskins. Is it “time”? Being a fool is not a vice, and being old is not a virtue. I have something to say however: due to various circumstances, my financial fantasies are experiencing a certain strain or crisis. Being a man of honour through and through I must confess – when my colleagues told me this was “the biggest prize” in Latvia, I  thought to myself – I wonder how big is it? I'll learn all about it tomorrow! (The ceremony was taking place the day following the interview.)

Gentleness, sin, hunger, thirst! The azure of the sky, cloud castles. High mountains, great waves. Madness of a hero, the serene beauty of honesty. Language itself, my lewd and capricious lover. But if I must say what “inspires me to write”, then you've asked me the hardest of questions! Inspiration falls stiff to the ground like a bird– and is done. What is it like – to fly? You never know it beforehand, and always forget afterwards. One might say that we are inspired by others' inspirations embodied by images or sounds. All play, all religions, all arts, all genres, all rebellions begin like this – you observe for a while and then join the ranks, side by side. Start showing your poems to your grandma or girls at school.

Critic Guntis Berelis once wrote that there are two main topics in your first collection of poems “Piemineklis kazai” ["Monument to a Goat"] – language and time. Has your relationship with language changed, and how is it different now?

My relations with different writers and poets have been like the relationship with my missus. There were honeymoons and years of admiration when it seemed she is listening to me all the time. There were moments of deep understanding, gazing into each other's eyes. I am starting to notice more often – language can “see right through me”. She stays quiet for a while and then reminds me I've been telling “the same old lies” over and over again. She uses these words, or different ones. Sure, we can get along! I always let her know she is in control, in charge.

In his review of your collection, poet Kārlis Vērdiņš wrote: “all in all we are nothing but characters in Bērziņš' dream he dreams book to book”. I've heard you have spectacular dreams. What are dreams, what do you make of them?

Dreaming is the most open genre in art – it's a pity one cannot “copy” it straight away and show others. I've had rather emotionally intense and “symbolically motivated” dreams, in series, with sequels... I sometimes remember in a dream which lover's porch I was on in the previous dream, how many times the doorbell rings – yes, thrice, that means it's the age of communal apartments! As I throw myself up the stairs, I inevitably wake up! Oh, no! A series of lucid dreams – I am telling everybody that “we are now dreaming”, it is possible to fly, to win all wars, “but we shall lose hold on each other tomorrow”...  “Theatre series” - we have staged plenty... In the daytime a man is nigh ready to avoid the most splendid of theatres – I'll rather have a pint of Prague beer and a hog roast! Maybe we seek in dreams what we miss in presence? God forbid! I am standing in front of an audience, mind gone blank;  the lines are on the page, but can't read them! Once we sat in the auditorium, the third chime, the curtain opens – down there is the “real” auditorium, and we are actually on the stage... Just don't let them know you've been “pranked”, - now all is left is to twaddle my way through and settle in! I think my dreamer's talent is well worn-out. Just one last thing. The director keeps going even when the eyelids are open, the first few seconds or minutes at least. In those first moments, we are looking for more sturdy material out of which a copy will be made of the things that could only be felt, never expressed or memorised. This is “literature”. When telling to others, we readily add decorations, otherwise “they wouldn't understand”. However, we each have our own rules and codes for this genre.

What lured you into translating scriptures?

Not everybody, I suppose, is equally excited about all texts of this kind; only about the ones compatible with our own religious experiences and trials. The “cult of suffering” of the Prophet's grandson, Imam Hussein, found in the wailing of the Shi'ites brings me to tears every time – as a child I was prepared by the cult of suffering of Jesus. Poetry of mystics is dear to me – whether it be Angelus Silesius, or the Spanish John of the Cross, or the Turkish Yunus Emre, or the Turkmen Magtymguly, or the wise Persian Rūmī. I am sure there is religious poetry, with its sacred and “higher” genres, that is inaccessible to me. The religious instinct is as mighty and contradictory as the erotic one. Psychologists say there are people in whom neither one nor the other ever awakens. I wouldn't dare to read, let alone translate the most genius poetry about same-sex love, but I know such poetry exists and I believe there are geniuses among its authors.

We all know that the Lifetime Achievement Award is in no way the end. What are your creative plans for the future?

Being with language! - not sitting at the desk, or by the computer, but in bed. To write for fun, for sin! But there are promises yet to be fulfilled, I must pay off my debts;  I should finish the Spanish “Song about My Sid”; his fellow and acquaintance, Emir of Seville is the next in line, then the “decadent” of Arabic poetry Al-Mu'tamid ibn Abbad. Strange contemporaries indeed: one – an epic hero like Roland or the Bearslayer, the other – like Baudelaire, or Edvarts Virza! When I get one in print, I want the other to be published. The one by the crude and sweet Spaniard... Am I... painting a picture? And in the South Caucasus I translated the Turkmen, Turkish and Azeri epic “The Book of Dede Korkut”. My colleague Valda Salmiņa translated the “Book of Lamentations” by  the classical Armenian religious poet Grigor Narekatsi. Read both of them! God has them next to eachother in his bookshelf. And we... are painting a picture in Latvian. I won't have enough time to paint the poems of the bald Icelander Egil Skallagrim. I should have arranged my lifetime differently! “Debt relief” will come sudden – and if I'm lucky – “unexpected”.