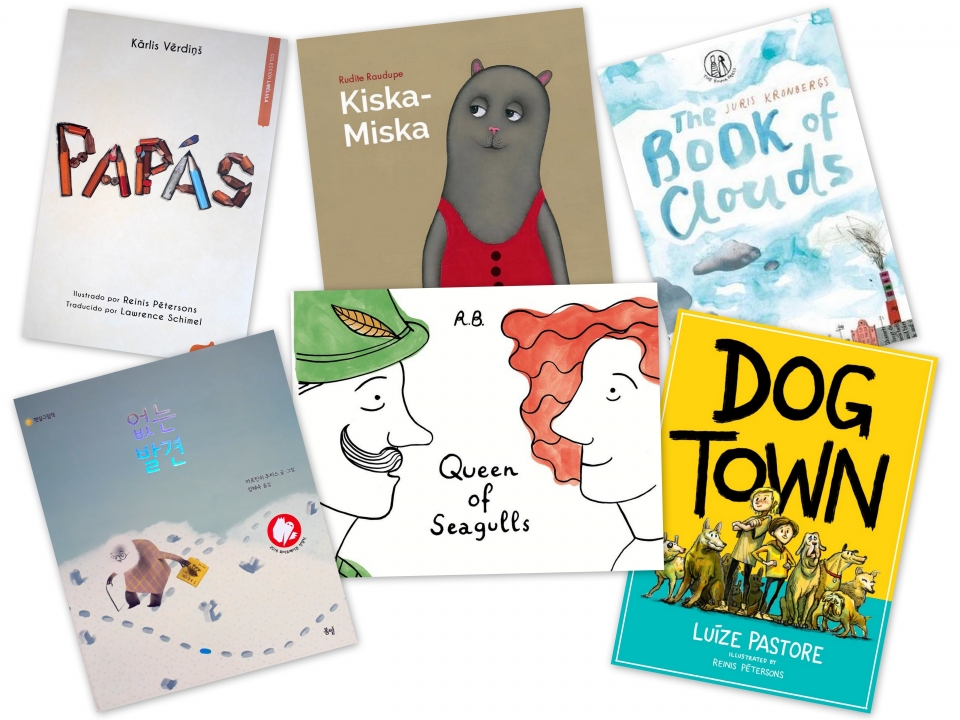 Works of Latvian children’s writers and illustrators continue bringing joy to readers abroad. Six more translations have been published in the UK, Korea, Estonia and Spain.

The book which earned Luize Pastore the Annual Latvian Literature Award  - “The Tale of the Maskatchka District” (Maskačkas stāsts, Neputns, 2013) was recently published by Firefly Press under the title “Dog Town”, translated by Žanete Vēvere Pasqualini. This is an early-grade adventure story, which is told from the perspective of a young boy, Jacob Bird, who unexpectedly ends up living in Maskatchka, a notorious district of Riga steeped in legend. The illustrator of “Dog Town” -  Reinis Pēterson’s was nominated for the International Jānis Baltvilks Baltic Sea Region Award for the wonderful illustrations. And recently we received really exciting news – “Dog Town” selected for the Guardian Books #bestnewkidsbooks2018 supplement. Find more about “Dog Town” and other Luīzes`s beautiful children`s books here (luizepastore.com).

“The Book of Clouds” (Mākoņu grāmata, Liels un mazs, 2010) - children’s poetry collection by Latvian writer Juris Kronbergs with colorful and witty illustrations by Anete Melece, translated into English by Māra Rozītis and Richard O`Brien has been published in UK by The Emma Press. “The delightful book explores its subject in a new and interesting way. Presented as an illustrated book of poetry, this collection is sure to inspire young readers (and writers) to think creatively about the natural world. Taking by turns, a humorous and fact based approach, these poems are excellently well crafted and present the many natures of clouds,” writes The Emma Press.

The renowned artist Rūta Briede debuted as a writer in 2017 with a children’s book “Queen of Seagulls” (Kaiju karalienes noslēpums, Liels un mazs, 2017), illustrated by the author herself. This year, “Queen of Seagulls” was published by the UK`s publishing house The Emma Press, translated into English by Elīna Brasliņa. This book belongs to the so–called crossover genre and is suitable for children and adults equally. Renata is a middle-aged lady who cannot stand seagulls – she writes complaints about them to the city council and steals away their food which for some weird reason she really enjoys. Rūta Briede illustrates books, draws comic, designs puppet shows and is a lecturer at the Graphics Department, Art Academy of Latvia. Rūta received the «Young Growth Prize» in the Jānis Baltvilks Prize competition for this work. Latvia Puppet Theatre staged a play based on the story of Renata, and it was nominated for "Spēlmaņu nakts 2017/2018" award as "Children’s Play of the Year". Check out more of Rūta Briede`s artwork on her website (rutabriede.lv).

This year saw the first ever publishing of Latvian literature in the Republic of Korea – Springshine publishing house issued Mārtiņš Zutis’ book “The Discovery that Never Was” (Nenotikušais atklājums, Liels un mazs, 2015), translated by  Yomu Hyesuku. The young and talented author Mārtiņš Zutis’ book has been included among the 200 best international books in “The White Ravens 2016” catalogue as one of the most innovative, creative high quality European works of literature. Mārtiņš Zutis is an illustrator, animator, graphic designer and writer. He’s a long-time contributor to “kuš!”, a comic art anthology which features artists from Latvia and beyond (you may find more of Mārtiņš work here: martinszutis.lv). “The Discovery that Never Was” tells a story about an old naturalist named Karl Darwing, who finds himself on the verge of discovery one cold winter morning.

Story by Rudīte Raudupiete “Mincy Brincy” (Mincis Brincis, Madris, 2016) has been published in Estonia, by publishing house Glossus under the title “Kiska Miska”. This storybook is illustrated by Zane Lūse and translated by Annika Oras. “Mincy Brincy” a delightful story for children 3 to 6 years of age that features animal characters and a philosophical aspect that can be read on several levels. The main character - Mincy Brincy is a cat who loves collecting things in his bag as he walks along the road, but soon finds that there is a serious downside to collecting rocks, birds’ eggs, and chestnuts.

Kārlis Vērdiņš comes across as both ironic and loving in his writing about a family’s everyday life, and he will definitely make people of all ages laugh. The main character of this poetry collection is Daddy, but which Daddy is it? The one who stays at home with his son while mom is out at work, or the aggressive driver? Vērdiņš challenges his readers to rethink traditional social roles. The poetry collection “Daddy” (Tētis, Liels un mazs, 2016) is now available in Spain, published by Esdrújula Ediciones under the title “Papás”, translated into Spanish by Lawrence Schimel. The talented Reinis Pētersons has provided the illustrations for this book creatively using saw-dust and pencil shavings. “Daddy” was included in the White Ravens 2017 Best Children's Literature Catalog and the IBBY Honour List 2018. The collection also earned the International Baltic Sea Region Jānis Baltvilks Prize as best collection of children's poems in 2017.