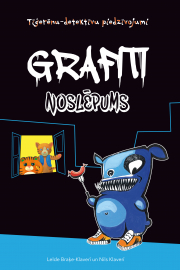 Every night, new words, scribbles and drawings appear on the city walls. Recently strange and colorful creatures have been spotted in the streets. The little tiger detectives Iago and Rix start investigating. In the process, they meet graffiti characters who come alive at night... In the final pages of the book, there’s a glossary of street art terms as well as Rix’s little French dictionary.
The illustrations have been inspired by the graffiti and street artworks found in the streets of Riga. This is the second book in the series “The Little Tiger Detectives”.