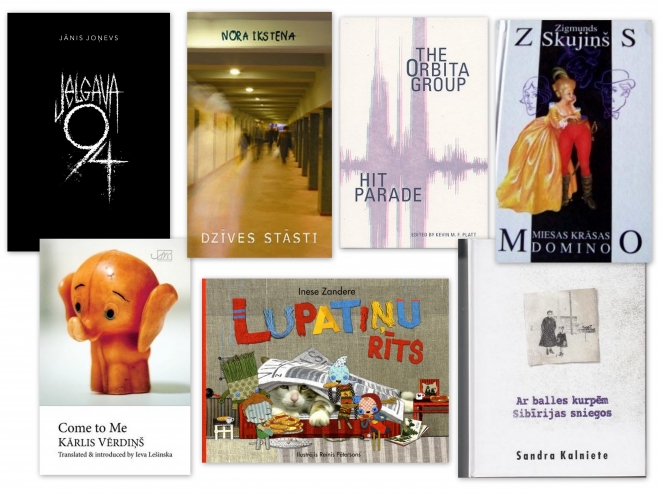 Both literature and metal fans took an immediate liking to Jānis Joņevs’ coming of age story “Jelgava 94” (“Doom 94”), and soon enough it became a bestselling novel. The book was also awarded the Annual Latvian Literature Award as best debut in 2013. “Doom 94” earned Joņevs’ many other awards, including, the European Union Prize for Literature. Within the last couple of years, it has been translated into English, French, Norwegian, Slovenian, Croatian, Estonian, Hungarian, and other languages. In Latvia, the novel has already been adapted into a play, and a script is being written for a feature film.

Nora Ikstena was one of the four authors to represent Latvia in the international London Book Fair 2018, and one of her books most appreciated by readers has been her novel “Mātes piens” (“Soviet Milk”). However, “Soviet Milk” is far from being the first work by Ikstena to get noticed abroad. Ikstena’s deeply moving and sincere collection “Life Stories” has been translated into English, Hindi, Macedonian, Albanian and Italian. One of the collection’s short stories “Elza Kuga's Old Age Dementia” was included in the "Best European Fiction 2011" prose anthology, and her story "Lakatiņš baltais" (“The White Handkerchief”) was published in Italy in a separate book, titled “Un bianco fazzoletto”.

In 2014, Latvian media was happy to announce that Kārlis Vērdiņš’ poem "Come to Me" was named as one of the most beautiful love poems in the world, and is now among one of the 50 Greatest Love Poems of the Last 50 Years selected by the Southbank Centre. Next to Vērdiņš’ three-day-old little love & guilt sandwich are poems by authors like Margaret Atwood and Ted Hughes. The poem was translated into English by Ieva Lešinska and included in the “Six Latvian Poets: New Voices from Europe & Beyond” collection (Arc Publications, 2011). One can find the original first published in Latvian in author’s collection of poems “Es” (“Me”, Neputns, 2008). A book of Vērdiņš’ poems translated by Lešinska were published in the UK with the same title as its most famous poem “Come to Me” (Arc Publications, 2015).

Poet and children's author Inese Zandere’s works are loved both in Latvia and abroad - her works have been translated into Russian, English, Swedish, German, Lithuanian, Estonian, Hungarian, Czech, Ukrainian, Polish, Bulgarian and Moldovan. One of the brightest

examples of the success of Zandere’s work is the cultural project “Lupatiņi” (“The Shammies”) that includes music, Zandere’s cuddly books, illustrated by Reinis Pētersons, as well as a witty animated series, written by Zandere and directed by Edmunds Jansons. The Shammies is a story about four rascals – Sockie, Mitten, Hankie, and Pillow. The books have been translated into Estonian and Arabic. The six Shammies films have been dubbed in Latvian and English, translated into French and Estonian, screened in over 70 festivals all over the world, and awarded significant local and international film prizes.

As it turns out, you don’t have to be a rockstar to tour the US - poets can go on international tours as well. Latvian-Russian poets from the Orbita group - Sergey Timofeyev, Artur Punte, Semyon Khanin and Vladimir Svetlov have proved this to be case. What is their secret? This group of poets are experts at putting out bilingual books - usually in Latvian and Russian, and they are often translated into other languages, like Italian, Croatian, German, etc. Poetry readings abroad is also something the group has experience in - in 2016, Orbita went on tour around the US to present their New York published collection of translated poems “Hit Parade” (Ugly Duckling Presse, 2015), where poems by ”Orbita” can be read in Russian and in English translation.

“The Button” by poet Knuts Skujenieks is special because it consists of a single poem translated into 33 languages - English, French, Belarusian, Russian, Spanish, Greek, Livonian, Swedish, Bulgarian, Italian, Norwegian, Icelandic, Turkish, Arabic, Georgian, Hebrew, Armenian, Chinese, etc. Skujenieks wrote the poem while being in Mordovia, in a Soviet gulag camp in 1964. He devoted the intimate poem to his wife, yet, after it was first published in 1990, it resonated with the readers across the country and soon enough its many translations followed making the poem famous around the world.

“Guernica” is to publish Skujenieks’ “All I Have is Words” in the UK this year.

Politician and art historian Sandra Kalniete’s story about the deportation of her parents to Siberia is one of the most frequently translated works of contemporary Latvian literature. As the author herself reveals in an interview, her aim was to tell Westerners about the history of Latvia, therefore she only started to put the book together after funding was granted for its translation into French. The work was translated and warmly received in France; with one of the most popular magazines “Elle” named it the Book of the Month. The book has so far been translated into 13 languages, and will soon be seeing translation in Tamil, as well as an e-book publication in Spanish.

Skujiņš’ novel is like a game of dominoes! Zigmunds Skujiņš is among the most widely translated and popular Latvian writers, with his works translated into English, German, French, Russian, Lithuanian, Estonian, Czech, Slovak, Polish, Georgian, Bulgarian and other languages. During the Soviet rule, Skujiņš’ novels were published in as many as seven million copies. One of his most impressive novels is definitely “Miesas krāsas domino” (“Flesh-Coloured Dominoes”), translated into English, Swedish, Macedonian and Italian.

This year, “Vagabond Voices” is to publish Skujiņš’ “Kailums” with the title “Nakedness” in the UK.

Osvalds Zebris’ “In the Shadow of Rooster Hill” tells a story about the Latvian experience during 1905 and 1906 under the Tsarist Russian rule. It is not only the first book published in the “We. Latvia. The 20th Century” historical novel series, but also the only book in the series to receive the European Union Award in Literature. This award has ensured numerous translations of the novel to be scheduled - currently eight publishing houses hold the rights to the translation of Zebris’ book. It is to be translated into Albanian, Bulgarian, Croatian, English, Hungarian, Italian, Macedonian and Serbian.

The British “Jantar Publishing” will be publishing “In the Shadow of Rooster Hill” in English this year.

The young artist Mārtiņš Zutis’ sincere and clever picture book for children about an old explorer, who comes across suspicious footprints in his snowy backyard, became a bestseller shortly after it was published by “Liels un mazs”. The translation rights have been sold to publishing houses to publish the work in Slovenian, Polish, Estonian, Korean, Chinese, and Dutch and Czech languages. The book has been celebrated also locally and was recognized with the International Jānis Baltvilks Prize as the best debut in children's’ literature. Mārtiņš Zutis is the author of both the story and illustrations for the book.

“Centrala Ltd” is to publish its English translation titled “The Discovery That Never Was” in the UK this year.