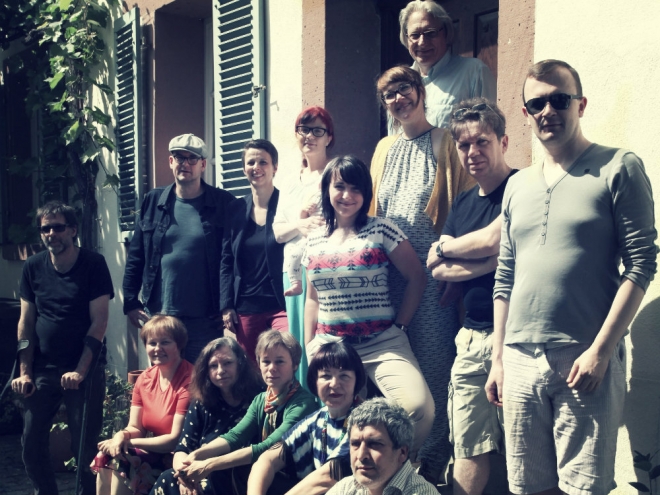 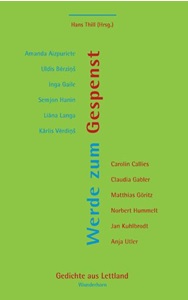 On March 17th at 17:00 in Halle 5/K206, the Latvian poetry anthology "Become a Ghost" ("Werde zum Gespenst") will be launched with the participation of the publisher KuentslerhausEdenkoben Der StifungRheinland-PfalzfuerKultur and some of the creators of the anthology – German poet, translator, and the anthology's compiler Hans Thill, Latvian poet, playwright and director Inga Gaile and German poet Jan Kuhlbrodt.

The poetry anthology "Become a ghost" was created as part of the project "Poetry of Neighbors – Poets Translate Poets" ("Poesie der Nachbarn. Dichter uebersetzen Dichter") financed by the Arp Museum - Rolandseck Railway Station Foundation and Art House in Edenkoben, Germany. Within the framework of the project, every summer German and non-German poets are invited to the Edenkoben Art House for a poetry translation workshop and for one week poetry is translated into German language. Translations are published in a book, and it becomes a messenger for contemporary foreign poetry for German readers. In the summer of 2015, six well-known Latvian poets took part in the project: Kārlis Vērdiņš, Amanda Aizpuriete, Liāna Langa, Uldis Bērziņš, Inga Gaile and Semjon Hanin, as well as six German poets: Carolin Callies, Claudia Gabler, Matthias Göritz, Norbert Hummelt, Jan Kuhlbrodtund and Anja Utler. As a result the anthology Become a Ghost was created, with Latvian poetry published in Latvian and German.

In talking about her impressions of the workshop, Latvian poet Inga Gaile said that "Edenkoben is a beautiful and calm town – a very good place for working on translating not so comfortable emotions and works into a different language. It was very pleasant to get to know popular German authors and talk to them about my poetry and the poetry of others."