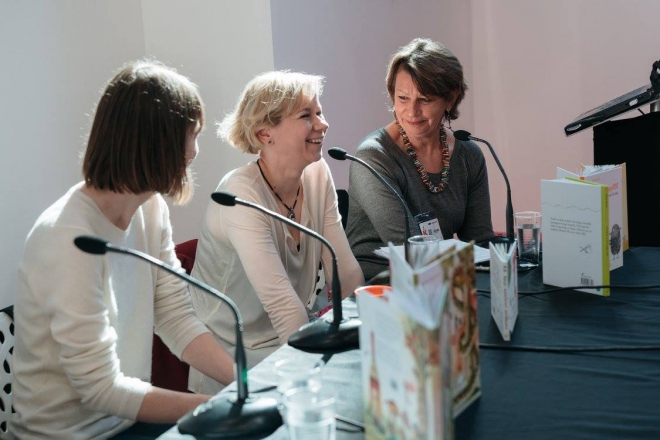 31 May – 3 June, Riga is hosting representatives of the British “Ugly Duckling Presse”, “Jantar Publishing”, “Wrecking Ball Press” and “Harvill Secker” in order to introduce them to Latvian literature and publishing industry. During their visit, the publishers will be joined by the Chair of IBBY UK (The International Board on Books for Young People) Pam Dix who will be holding a seminar for Latvian publishers on the export potential of childrens' literature to the UK.

This is the fourth time British publishers travel to Riga in order to learn more about the Latvian book market and its peculiarities, contemporary Latvian prose, as well as the grant systems available to  foreign publishers for publishing translations of works by Latvian authors. The first couple of visits have resulted in signing several agreements on publishing works of Latvian literature in Great Britain.

“We are trying to bring together publishing houses with similar profiles in Latvia and Great Britain. Hence, the British publishers will be offered literary works by Latvian authors that reflect their specifications and their readerships. The most important thing is to make sure these publishers are at all interested in publishing foreign literature since the number of books from other countries entering the British market is proportionally very small,” explained the director of “Latvian Literature” platform Inga Bordnarjuka-Mrzauskas.

Along with the British publishers, Latvia is welcoming the Chair of IBBY UK, Pam Dix, who will be giving a seminar on childrens' literature standards in Great Britain and the export potential of Latvian literature in the UK markets. The seminar will take place on 31 May, 14:00 pm, in the “Nice Place TELPA” literary café, Krišjāņa Barona 21a. The event is open for everyone interested, and attendants are welcome to register by sending an e-mail to: info@latvianliterature.lv

The visits of British publishers to Latvia are organized as part of the participation of Latvia in the London Book Fair 2018, in which the Baltic states will be exhibiting as Market Focus. Currently Latvia is laying the groundwork for participation in the fair by working on translations of Latvian literature into English and designing the culture programme to be offered in London and elsewhere in the UK.