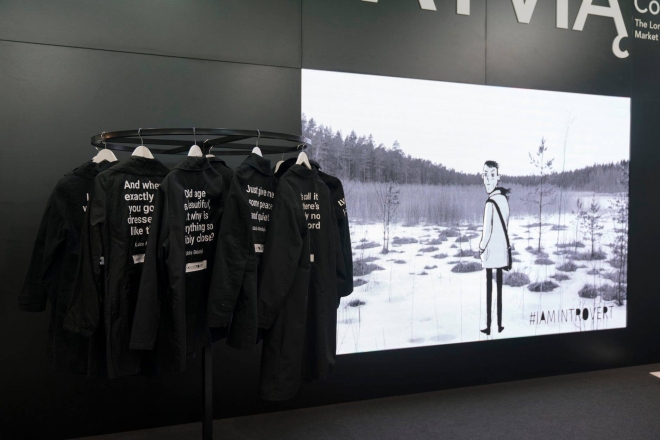 Campaign “#iamintrovert” was created in early 2017 with an objective to promote Latvia’s participation in the London Book Fair. In April 2018, Latvia and the other two Baltic states were the Market Focus countries at the London Book Fair, which provided our literature unprecedented amount of opportunities and attention in English-speaking markets. The campaign was made popular through projects like the “Introverted Wardrobe” at the London Book Fair, the comic strip about introverted writers, now published as a comic book titled “Life of I.”, the range of #iamintrovert beers, the “Introverted Lunch” events in restaurants across Riga, as well as design apparel and other products related to the campaign. The brand was highly appreciated in the UK not only on social media but also by some of the biggest media outlets, such as the BBC.

“The idea to create a marketing campaign for Latvian literature in the London Book Fair was inspired by the necessity for a strategically sound international brand to represent Latvian literary and printing industry. We wanted people abroad to associate the name of our country with literature of high merit and quality. We had to come up with an attractive “packaging” for our authors and their works. The audacity and hard work we invested is still yielding results,” explains Inga Bodnarjuka-Mrazauskas, director of the “Latvian Literature” platform.

The author and creative director of the campaign, Una Rozenbauma, claims that the key to the success of this campaign was the ability to turn our disadvantages into advantages: "Everything we could be judged for, we transformed into our biggest strengths. We take pride in things others would likely want to hide, moreover, we do it in a way that resonates with the British — through self-irony.” Rozenbauma also highlights the productive collaboration with the International Writers’ and Translators’ House, and the “Latvian Literature” platform who did not shy away from this rather bold idea: “One of our greatest successes was our talented team where each person added their own introverted twist making the entire introverted writer concept deeper and more exciting. Campaigns for cultural projects are both the most complicated and the most interesting, because of how many personalities, opinions and visions are involved. In this case, we managed to succeed because everyone was towing the rope on the same side.”

This year, the 13th Latvian Art Directors Club (LADC) creative excellence festival “Adwards” was held. Throughout the years, more than 2300 artworks have competed and been judged by over 110 members of jury from all around the world.

Learn more about the #iamintrovert campaign in this video trailer: https://www.youtube.com/watch?v=2IN8pRjUiEo