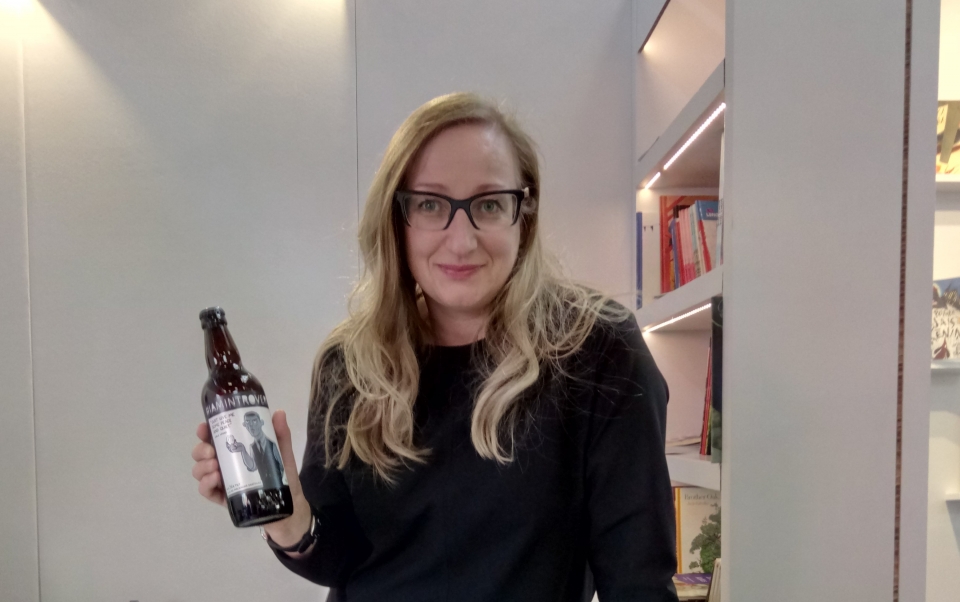 Žanete Vēvere-Pasqualini’s position in her field is rather unique – she is a government-employed literary agent. Alongside two other colleagues, Jade Will and Vilis Kasims, Žanete represents the entire Latvian literature abroad. She is always on a mission to find potential foreign publishers for works of Latvian literature, and to bring them together with the holders of publishing rights, most of whom are Latvian publishers. Žanete lives in Italy and works also as a translator. This, too, is unusual since she translates from Latvian, her mother-tongue, into English. Among other works, she has translated Ieva Flamingo’s “Noisy Classroom” (The Emma Press), Luīze Pastore’s “Dog Town” (Firefly Press), Kristīne Ulberga’s novel “The Green Cow” (Peter Owen Press). Read the interview Žanete gave prior to Latvia's peak season at the book fairs in London, Leipzig, and Bologna!

You will likely be hearing this question often in the next couple weeks. How are you?

I’m good. In the last two weeks I have managed to successfully balance the main areas in life – work, home, and family. I even got rid of weeds in the daffodil and tulip beds in my garden which has been neglected for almost a year since there is never enough time. I’ve made timely summer travel plans with my family and friends. I have even successfully cleared up my headspace which does not happen often given my proclivity to throw myself into all sorts of projects neglecting everything else. I can say with certainty that I am doing well. I’m well rested, but not to the point of being bored. Just enough to prepare myself for the intense workload in the upcoming months.

It’s been a year since Latvia, Estonia and Lithuania attended the London Book Fair as the Market Focus countries. How successful was this event for you, and for Latvia in general?

Maybe it was different for Estonians and Lithuanians considering that they started promoting their literature long before us, but for Latvia it opened up a new door to world literature. Despite starting off slow, we have managed to squeeze into the global market, and now it’s important to keep that door ajar. Latvian books are finally available for purchase abroad and, what is even better, they are being noticed, reviewed and highly praised. Already during the previous London Book Fair, Luīze Pastore’s “Maskačkas stāsts” (Dog Town) was “The Times” children’s book of the week, and included in Best New Kids Books list by “The Guardian”. Nora Ikstena and Kārlis Vērdiņš were in the spotlight being interviewed for the BBC. Nora was also one of the the EBRD Literature Prize finalists. I believe many of our authors will find the past year successful. Having the Market Focus title at the London Book Fair 2018 certainly helped us achieve all this by attracting foreign, especially English speaking, publishers, and in a way pressing our own government to invest more into literature, which comes at great expense when you are striving for professional quality. None of this would be possible without financial support, especially when starting from zero.

You are probably tired hearing this question, but many are still curious: how would you describe Latvian literature in a few sentences? What are its strongest suits?

Latvian literature is tightly connected to history for reasons well known to us. You would be hard-pressed to find works free from it, works based purely in human interaction. It might be that in literature, too, we are still unable to break free from generations of trauma, suffering, hardship, and maybe even self-pity. We are still to achieve lightness in our literature, and I do not mean the kind that is banal. No doubt, all these emotions had to have an outlet, had to be talked about, but I hope that we can conclude these discussions with the historical novel series “We. The 20th Century”, mark the beginning of a new era: “We. The 21st Century - Here and Now”, and march right into a new stage addressing today’s issues and topics. I would like to see more novels emerge about human relationships in a more contemporary context, and I feel that this is what foreign publishers would be drawn to. Our strongest suit is the serious literature known as literary fiction, stories and poetry. Interestingly enough, we were warned before the start of the campaign that we will have a hard time selling poetry, especially children’s poetry. But since our children’s poems are so up-to-date, topical and related to real life without unnecessary sublimation, we have managed to make it work. It is impossible not to love Inese Zandere’s, Ieva Samauska’s and Kārlis Vērdiņš’ childen’s poems.

Which Latvian works are your favourite?

I sometimes think it is impossible to separate work from my own preferences. I have developed a truly eclectic taste and am able to read almost anything now. I will rarely answer to “Did you like this book?” with a concrete “Yes” or “No”. I will usually approach the text from various perspectives. I often look at works through the eyes of certain publishers, subconsciously shortlisting ones potentially interested in the book in question. I try to always keep an open mind but it might have metastasized into some form of professional disorder. Truth be told, I don’t see myself as a lover of particularly rough literature. I appreciate a book that provokes thought, but I don’t like when it puts too much weight on the reader’s shoulders. I struggle reading crude or carnal scenes, except when they are well timed and witty. When it comes to author’s style, one of the main aspects I take into account is the atmosphere and writer’s ability to create worlds in front of your eyes. Maybe that is why I love authors like Regīna Ezera. I also adore the writing of Kristīne Ulberga, whose book I have translated, because she has an admirable knack for creating an aura around her books. I forgive her the carnal and rude episodes since they are always justified and cleverly applied. I had a funny conversation with Milda Sokolova from “Inostrannaya Literatura” about this. She is a Latvian born Russian publisher who once received a call from Ulberga’s Russian translator worried the work might shock the Russian reader. I also love Nora Ikstena, Inga Ābele, Dace Rukšāne, and from male authors – Pauls Bankovskis, and many others... At times when I feel like clearing my head, I’ll gladly read lighter stuff, some detective story or a thriller. We are not yet on the world class level in these types of literature, but lately these genres have been improving significantly, the books are getting more authentic, and maybe soon we will have something to offer in this area as well.

What are your plans and goals for the book fairs in London, Frankfurt and Bologna?

My main goal is to keep the publishers interested and to utilize the existing projects to attract more publishers. I am planning to strengthen ties with foreign publishing houses where we have been able to put out top quality translations in their languages. I would like to once again mention the important role the London Book Fair had in achieving this since we now have a body of work translated into other languages enabling us to better present our literature to foreign publishers. I would love for us to develop presence within large markets like China, Korea, India. We have commenced serious work with publishing houses in Russia and Germany, so hopefully we manage to get books published in those countries as well.

What would you say is the hardest thing in a literary agent’s day to day job?

The hardest thing is to get the publishers to read my emails and to get the communication rolling. It is important to gain their trust and not to let them down. You should not flood your partners with offers because, as Americans say, “time is money”. We are all busy and you must respect other people’s time, must try to figure out what their tastes and publishing profiles are like, then find a project that fits their business. This is where intuition often comes into play. The second hardest thing about my job is telling your author that their work has not been picked up yet by any of the publishers.

You are also a translator. Tell us how that came about!

My impatience and fear to miss deadlines is to blame. I like being in control of the situation although my nature is rather relaxed. This is a paradox of sorts. I kept promising publishers synopses and excerpts from works, and often ended up waiting or having to track down translations for too long. This is why I decided to try my hand at it, basically returning to my profession after years of hiatus. During university, nobody told me how unusual it was to be translating from one’s mother tongue into the second language. I was unpleasantly surprised to learn of this rule and wanted to challenge the stereotype. The fact that I have been rather successful at it brings me great pleasure. I used to read in English a lot which now comes in handy. I must admit that translation delights me, it is a relaxing process which allows me to forget about my problems and daily routine, and clears my head.