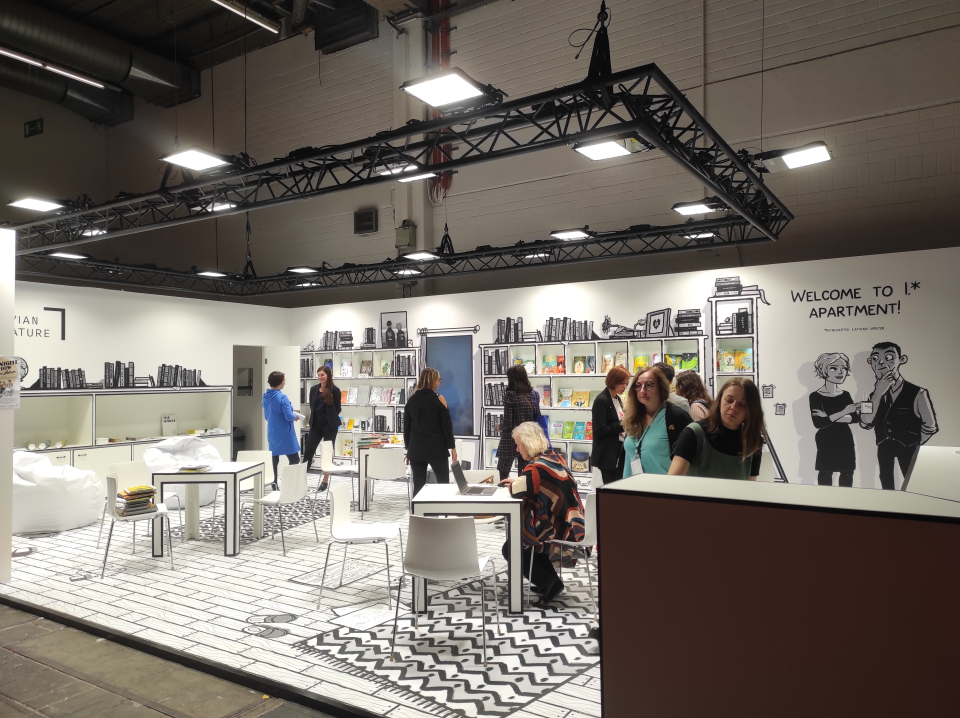 From 19 to 23 October, the “Latvian Literature” platform in collaboration with the Investment and Development Agency of Latvia (LIAA) is organizing Latvia’s participation in the Frankfurt Book Fair (Frankfurter Buchmesse). During the fair, Frankfurt will be hosting four events connected to Latvian literature and a special surprise party.

This year, the Latvian exhibition stand at Frankfurt is even bigger than last year, but still on theme with the Latvian literature promotional campaign “#iamintrovert”. The design of the stand, similar to the ones in this year's London and last year's Frankfurt book fairs, resembles the apartment of the introverted couple of writers I. and I., where their entire life, from their bookshelves to their dog, was drawn by the artist Reinis Pētersons. On 20 October at 17:00 p.m., a surprise party in honour of the introverted writer I. will be held in this apartment, which he himself is likely not to attend. An extensive cultural programme is also expected for Latvia in Frankfurt in connection with the preparation for the Guest of Honor status at the Frankfurt Book Market which Latvia is to be awarded in a few years.

Several events open to visitors and the general public will take place in Frankfurt during the fair. On October 19 at 10:30 a.m., writer and illustrator Anete Melece will take part in the Frankfurt Kids Conference event "How to create diverse books". Melece's book "Kiosk" has been translated into more than 20 world languages, as well as performed in theatre and opera. During the fair—from 19 to 23 October—the exhibition "The Horse" by Latvian illustrators and authors will be on display in Hall 4, Stand D59.

On 19 October at 19:00 p.m., at the restaurant “Walden” in Frankfurt, the "Late Night Show with Latvian Writers" will take place with performances by four Latvian authors whose books have recently been published in Germany – Jānis Joņevs, Krišjānis Zeļģis, Andris Kuprišs, Arvis Viguls. Illustrator Zane Zlemeša, representative of the comics anthology "kuš!", will participate in the comic and zine festival "Cozi", which will take place in Frankfurt from 21 to 23 October.

Latvia will be represented at the Frankfurt Book Fair this year by publishing houses Jāņa Rozes apgāds SIA, Pētergailis SIA, Liels und mazs SIA, Madris SIA, Aminori SIA, Baltais valis SIA, Jāņas sēta SIA, and the Latvian Publishers Association. This year, the Latvian stand will be 72 m² in size, which is 24 m² bigger than last year. 32 m² of the area designated for Latvian content will be allocated for the exhibition "The Horse", located in a separate stand. Latvia's participation with a national exhibition stand (Hall 4, Stand B2) at the Frankfurt Book Fair is organized by the LIAA in collaboration with the "Latvian Literature" platform.