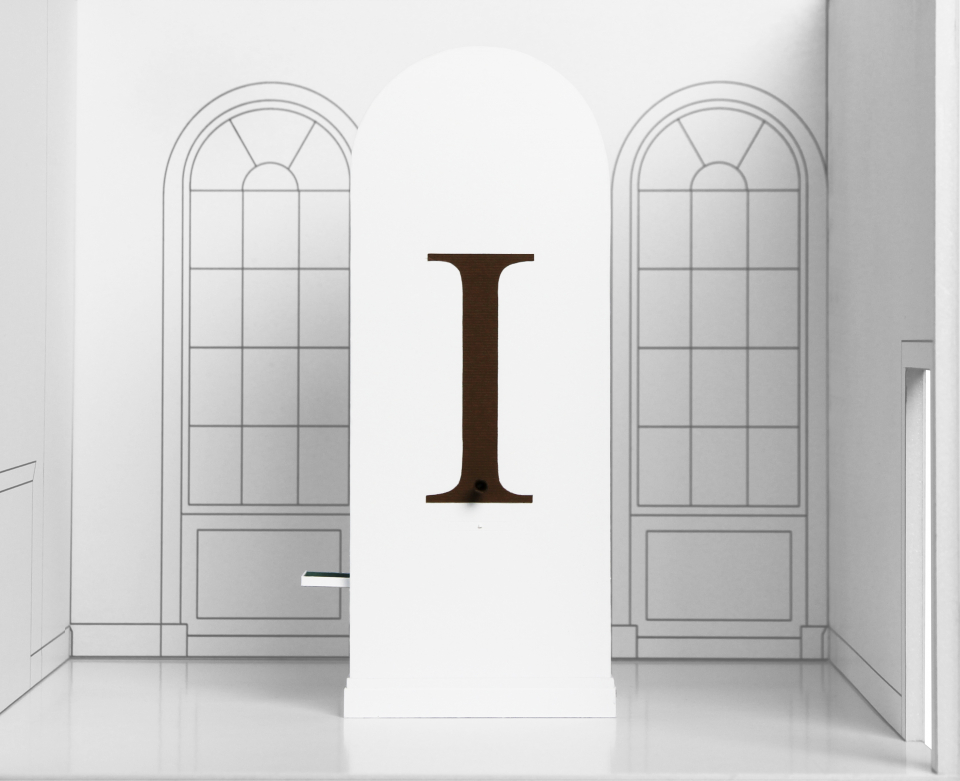 Having triumphed at the Latvian Design of the Year Awards in 2019, the “Latvian Literature” platform will be representing Latvia at the London Design Biennale with their literature promotion campaign “#iamintrovert”. The exhibition piece was designed by visual artists Krista and Reinis Dzudzilo and director Una Rozenbauma.

Artists Krista and Reinis Dzudzilo, together with the “Latvian Literature” team and the author of the #iamintrovert campaign concept Una Rozenbauma have created an art object titled “In3” or “Introvert In Interior”. In the exhibition, Reinis Pētersons’ comic strip characters – the writers I. and I. – are planned to come to life, and the visitors will be able to share secrets with them. Both illustrated writers will give responses to the stories shared privately in literary form.

“The object resonates with the interior of the room where the exhibition is to be held at the Somerset House with its vertical arch windows. Together they form a three-dimensional trinity. “In3” is at once a sacred and everyday object which itself is a space. The object appears as a sculpture, on each side enclosing the revelation of form and content. It is a performative and living monument to Latvian contemporary writers and literature,” Krista and Reinis Dzudzilo divulged.

With the #iamintrovert campaign, Latvia joined Lithuania and Estonia in the London Book Fair 2018 as one of the Market Focus countries. The campaign promoted Latvia as a nation of introverted writers who much more prefer the solitary writing process to gatherings and public events. The campaign received two gold medals at the Adwards 2018 awards, as well as the Latvian Design of the Year Award in 2019.

“The campaign achieves its goals with humor and wit, as well as lingers in people’s memories. It shows the psyche of the nation in a heartfelt way with a rich range of content. We hope that the campaign will continue,” said the chairman of the jury of the Latvian Design of the Year Awards 2019, the head of the Design, Architecture and Digital Art Department of the Victoria and Albert Museum, as well as the creative director of the 2018 London Design Biennale, Cristopher Turner.

The London Design Biennale is an association of the world’s most ambitious and imaginative designers, curators, and design institutions. The Biennale was scheduled to take place in September this year, but due to the restrictions imposed by the Covid-19 virus, its holding was postponed to the summer of 2021 (June 1-27). Artist and set designer Es Devlin has chosen resonance as the central theme of this year’s biennial, which the participants will play in their design works of art. In 2018, Latvian artist Artūrs Analts won the London Design Biennale with the art installation “Matter to Matter”.

Visual artists Krista Dzudzilo and Reinis Dzudzilo are a tandem of artists working together in visual arts, theater, and opera. Both have created scenography, videos and costumes for productions in various Latvian theaters and operas, as well as created several solo exhibitions of contemporary art, the latest being the Alma Mater project at the “Alma” Gallery. In 2019, Dzudzilo represented Latvia at the Prague Scenography Quadrennial with the winning installation “ZRwhdZ”. This work was exhibited at the Contemporary Art Center “Kim?”, and was nominated for the Purvītis Award 2021. In 2019, they received the Latvian Design of the Year Award for the historical exposition “Fire of Conscience”.

Director Una Rozenbauma has worked for more than ten years as a creative director at Mooz, DDB, Not Perfect, Vuca Communications, and Ogvily agencies. She is the author and creative director of the idea behind the #iamintrovert brand. She has created publicity campaigns for The Latvian National Symphony Orchestra, the magazine “Rīgas laiks”, the portal “Satori”, the film “Chronicle of Melania”, and others, and is the director and screenwriter for “Dog and Dream”, “Liberation” and “Window”.