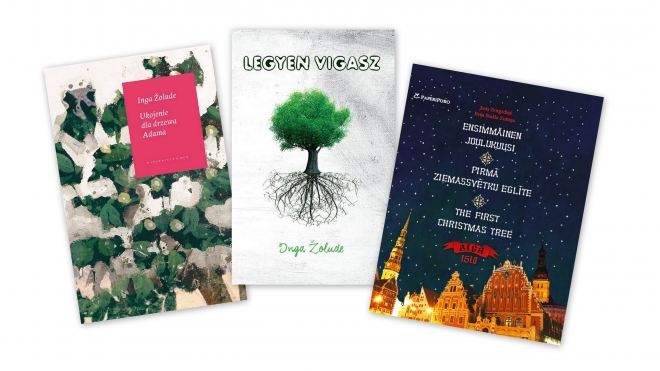 This spring, Inga Žolude's collection of stories “Mierinājums Ādama kokam” (“A Solace for Adam's Tree”) was published in Hungarian and Polish, and Juris Zvirgzdiņš' story for children “Pirmā Ziemassvētku eglīte” (“The First Christmas Tree”) is now available in Finnish.

Inga Žolude's collection of stories “Mierinājums Ādama kokam” (“A Solace for Adam's Tree”, published by “Dienas grāmata”, 2010) earned her the EU Prize for Literature in 2011. The collection consists of 13 stories united by a simple yet serene, deep and captivating idea – to tell life and death.

This year, the collection was published in two foreign languages – Hungarian and Polish. “Noran Libro Kiadó” (Noran Libro Publishing) published its Hungarian translation titled “Legyen vigasz” by Aranka Laczházi. The Hungarian edition was celebrated at reading events during the International Book Festival Budapest (20th– 23rd April). The Polish version “Ukojenie dla drzewa Adama” was translated by Daniel Łubiński, for whom this is his first translation from Latvian into Polish since 1989 when he translated Andris Kolbergs' novel “Cilvēks, kas skrēja pāri ielai” (“The Man Who Was Crossing the Street”). The Polish translation of Žolude's book was published by “Wydawnictwo KEW” (Kolegium Europy Wschodniej) and its presentation opened the European Literature Night in Wrocław on 22nd April.

"This frighteningly talented author has written a book in which both strong and weary yet surprisingly lively characters face the harsh truths of “here and now”. Having realised that the world order is not natural but rather constructed, they struggle in their attempts to naturalise the assumptions about what is logical. Žolude doesn't recite chants, she never preaches, but always flirtatiously recreates moments of tiresome reality, thus language becomes this youthful existence we are not used to experiencing in such highly concentrated form”, literary critic Rimands Ceplis writes about Žolude's “A Solace for the Adam's Tree”.

Meanwhile “Pirmā Ziemassvētku eglīte”/“Der Erste Weihnachtsbaum”/“The First Christmas Tree” (Pētergailis, 2011) by one of the most popular and productive author of childrens' literature, Juris Zvirgzdiņš, has become available also in Finnish. The text is accompanied by fun and touching illustrations by Evija Stukle-Zuitiņa.

The book was first published as a trilingual edition in Latvian, German and English, and the Helsinki publishing house “Paperiporo” has now made sure the work is available as a Finnish- Latvian-English edition titled “Ensimmäinen joulukuusi – Pirmā Ziemassvētku eglīte – The first Christmas tree” translated by Mirja Hovila and Seppo Hovila. At the centre of the book there is a story about the tradition of decorating the Christmas tree established in 1510 in Riga. Kaspars Eizentāls, representative of “Pētergailis” publishing house, praises the original edition: “The author vividly describes the beginnings of a tradition of adorning the Christmas tree, inviting his readers to join the vibrant festivities and experience the colours, sounds and people of the 16th century Riga. The writer and illustrator, while zigzagging past various historical culture monuments, take the contemporary inhabitants and visitors of Riga on a journey all the way to the memorial plaque in the Town Hall Square dedicated to this 500 year-old event.”