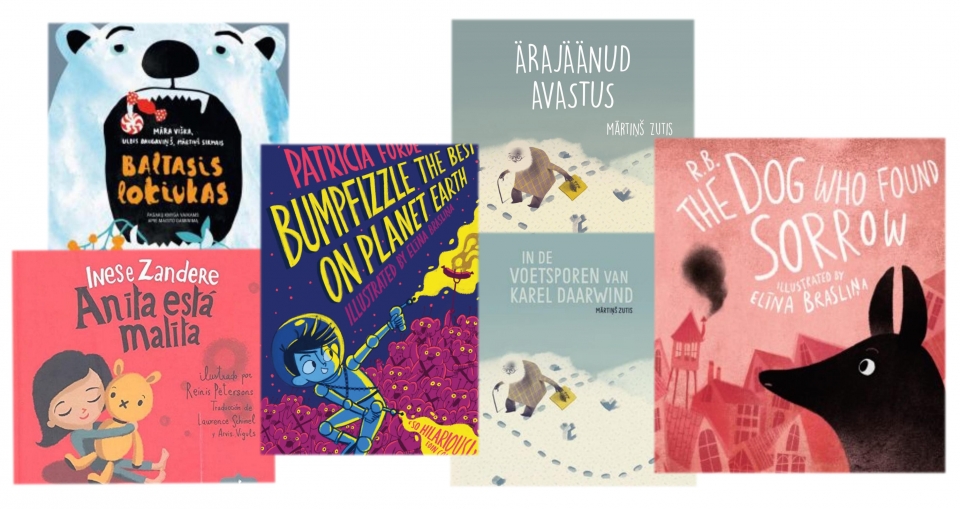 Exciting stories of a Brave Dog, White Bear, Natural Scientist, Alien boy and kids at a hospital, have been translated into English, Estonian, Spanish, Dutch and Lithuanian.

The picture book “The Dog Who Found Sorrow” written by Rūta Briede, illustrated and translated from Latvian by Elīna Brasliņa, has been published by The Emma Press. It is a beautiful, resonant book about sadness and healing suitable for all ages. It tells the story of a dog who, waking to find his hometown covered in thick black clouds, goes out in search of the source of sorrow. Black smoke and clouds suddenly take over the city causing sadness for its inhabitants. Every colour and scent has disappeared. The brave dog takes a ladder and climbs up to the sky to see what’s up. It turns out the clouds are filled with very sad beings called Sorrows. The dog takes out his harmonica and starts playing  to lighten the mood. The story is an intrepid quest, a parable about hope, and a curing tonic for our sorrowful times.

Mārtiņš Zutis’ “The Discovery That Never Was” is now available for kids to read in Estonian as “Ärjäänud Avastus” published by OU Paike Ja Pilv, translated by Contra, and in Dutch as “In de voetsporen van Karel Daarwind” published by Boycott, translated by Manten Devriendt and Liene Jākobsone. It is a story about the natural scientist Kārlis Darviņš who goes out to fetch a newspaper from his mailbox, but stumbles upon a trail of some one–legged creature in his snowed–up yard instead. Trying to follow the trail and pursue a scientific discovery, he is surprised to find that the number of feet keeps increasing. Beginning to realise that it might be some ten–legged alien or five bandits coming together the scientist decides that his discovery would be better left unfound and runs off. Now the readers will get the joy of finding out the truth on their own.

“All better!” by Inese Zandere has been translated into Spanish by Lawrence Schimel and Arvis Viguls, and published by Esdrújula Ediciones as “Anita Está Malita”. It is a collection of beautifully illustrated rhymes that helps to make being sick a little less scary with poems about things like broken bones, the chickenpox and having an injection, and with characters that will make the young readers laugh and smile. By looking at the pictures and reading or listening to the poems, children will learn to cope better with their fear of getting sick and medical treatments. It will encourage children and strengthen the emotional contact between the little patients, their parents and doctors.

“Bumpfizzle the Best on Planet Earth” by Patricia Forde and illustrated by Elīna Brasliņa has been published in English by Little Island Books. It tells a story of Bumpfizzle who is an alien and is sent to Earth from Planet Plonk on a research mission. Or is he really just a ten-year-old boy who is feeling a bit disgruntled at all the attention his parents are lavishing on The Baby? It is up to readers to make up their own minds. Either way, Bumpfizzle’s confusion at Earthling behaviours, as reported in his diary and his frequent reports back to Planet Plonk, are hilarious, and his adventures are ridiculous, from eating the cat’s food (it makes him throw up, always good for attention) to biting his teacher (to check if humans would make a good source of food for Plonkers) and attempting to sacrifice a goat (he soon discovers what goats’ horns are for).

“White Bear’s Cooking Adventures” written by Uldis Daugaviņš and chef Mārtiņš Sirmais has been translated into Lithuanian by Veronika Adamonytė and published by 700 eilučių as “Baltasis Lokiukas”. It is a picture cookbook for the whole family. Story of the six-pawed White Bear who lives in the bear village next to the North Pole. His father is a philosopher and his mother is the pancake princess. White bear hasn't yet found his calling. One day White bear falls asleep on a piece of ice and starts sailing around the world. In his journey White bear visits many interesting places and meets many people and other curious creatures. All of White Bear’s adventures have something to do with food – when White Bear finally returns home he has learned his true calling – to be a cook. He opens a restaurant in his village and the six paws are very useful to prepare all the dishes right on time.