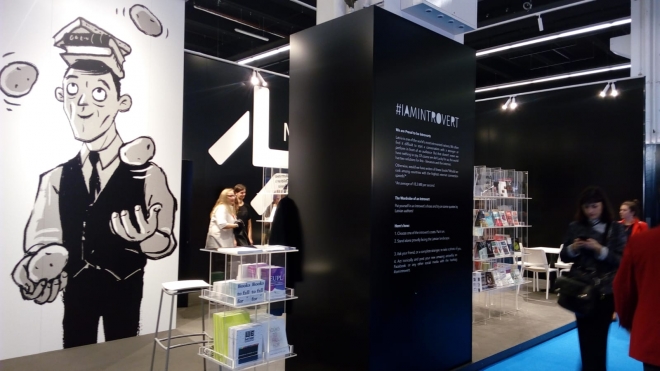 10-14 October 2018, Latvia will be participating in the Frankfurt Book Fair (Frankfurter Buchmesse), the biggest publishing industry exhibition event in the world. Latvia’s participation in the fair is supported by the Investment and Development Agency of Latvia (LIAA) and the “Latvian Literature” promotion platform.

This year, publishing houses “Liels un mazs”, “Pētergailis”, “Jāņa Rozes apgāds”, “Madris” and “Avantis Publishing”, International Exhibition Company BT1, printing businesses “WTM Baltic” and “Veiters Korporācija”, as well as the Latvian Publishers' Association (LPA) will be represented at the national exhibition stand at the Frankfurt Book Fair. The stand will be integrating the “#iamintrovert” campaign, previously successful at the London Book Fair in 2017 and 2018: “Frankfurt Book Fair organizers were happy with our presentation in London, and they advised we do something along those lines in Frankfurt in order to keep the image fresh and to ensure continuity of what we achieved as a Market Focus country at the London Fair. Frankfurt guests will likewise have the opportunity to “try on” quotes by Latvian writers, and take pictures. One of the walls of the exhibition stand is to feature a two-metre tall illustration of the introverted writer I, “ explained the “Latvian Literature” director Inga Bodnarjuka – Mrazauskas.

Thursday, 11th October, 10:00 a.m., director of “Liels un mazs” publishing house Alīse Nīgale will be joined by foreign colleagues from “Baobab Books”, “Aukso žuvys” and “Verlag Urachhaus” for a discussion “Children’s Literature from the Baltics”. The conversation is intended to introduce visitors of the fair to the spectacular and diverse range of Latvian and Lithuanian children’s books attracting publishers from all over the world. Meanwhile, “Frankfurt Kids Foyer” hall will be hosting a virtual exhibition of book artists, among them 26 Latvian illustrators, and Latvian animation film screenings. Originals of book art by the Art Academy of Latvia students will also be displayed as part of the Foyer exhibition, showcasing the unique style of each young artist to the foreign publishers.

Latvia can already boast several achievements at the Frankfurt Book Fair. Lauris Gundars’ “Hello, Whale!” (Sveiks, vali!, illustrated by Anete Melece and published by “Liels un mazs”) and Juris Zvirgzdiņš’ “Toby, Charlie and the Invisible Ghost” (Tobiass, Čarlijs un Neredzamais spoks, illustrated by Elīna Brasliņa and published by “Pētergailis") have been included in the prestigious “White Ravens” catalogue which selects especially noteworthy books from around the world each year. And two books by Inese Zandere – “One house for all” (illustrated by Juris Petraškevics) and “Riding High” (illustrated by Anna Vaivare) – have been included in the fair’s international book exhibition “100 Outstading Picturebooks”. Ināra Kolmane’s feature film “Bille”, an adaptation of Vizma Belševica’s literary work, has been nominated for the Frankfurter Buchmesse Film Awards as best adaptation of a book for children or young adults.

2018 marks the Frankfurt Book Fair’s 70th year running, and it is the largest publishing industry exhibition showcasing works in around 700 stands from 100 countries. Every year, the fair brings together almost 300,000 publishers, writers, book industry representatives and culture enthusiasts from around the world. This year’s Guest of Honour at the fair is Georgia. Latvian exhibition at the Frankfurt Book Fair can be found in stand B79, hall 5.