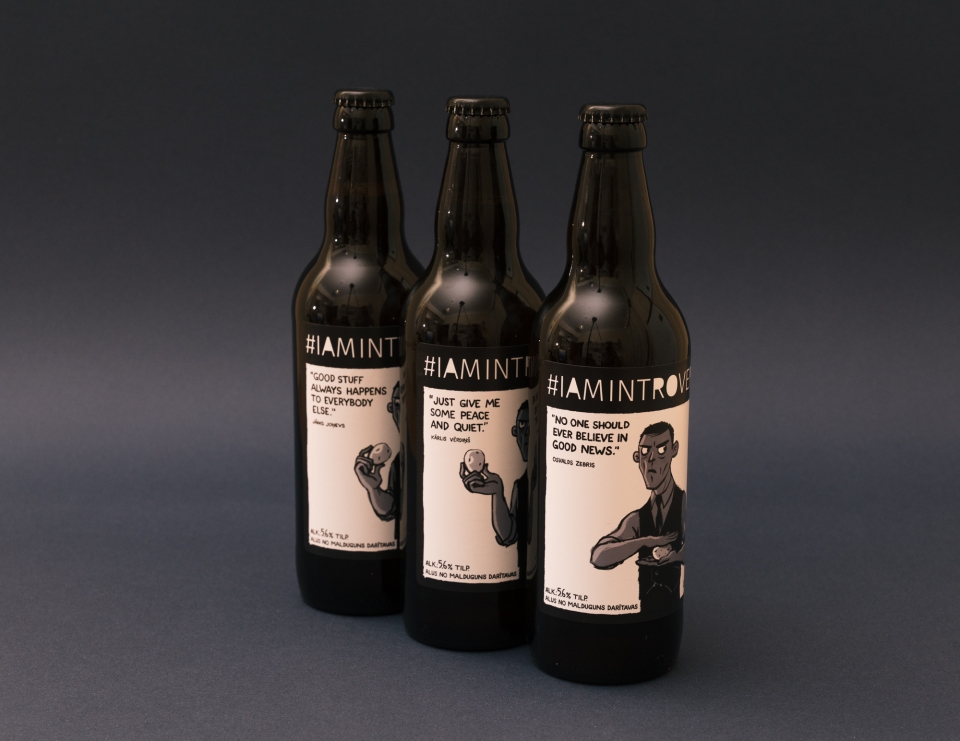 The new selection of beers has been created as part of the #iamintrovert campaign, designed to promote Latvian literature and prepare Latvia for the participation in the London Book Fair 2018 which the Baltic states will be attending as market focus countries. The idea to create this special beer selection was born from a challenge jokingly accepted by the poet and “Malduguns” brewer Krišjānis Zeļģis.

The labels on #iamintrovert beer bottles carry quotes from Latvian literary works of five authors –  Māra Zālīte, Jānis Joņevs, Osvalds Zebris, Inga Ābele and Kārlis Vērdiņš. The sixth bottle in the series shows “An introvert's risk scale” measuring the extent to which each swig turns the beer taster into an extravert. “The exciting thing is that you don't know which quote you're going to get when buying the beer. That's decided by fate, luck or the bartender,” points out Una Rozenbauma, the author of the idea.

The beer is unique not only for the quotes, but also for the special recipe that includes one of Latvia's most loved food items – potato. “Potato is Latvia's éminence grise, and I wanted to work this unassuming character into the drink so that its influence is subtle, yet palpably present”, explains Krišjānis Zeļģis. As of now, #iamintrovert beers are available in more that 20 locations in Riga and Cēsis.

10th – 12th April 2018,  Latvia, Estonia and Lithuania will be participating at the London Book Fair as market focus countries. The event is bound to open up new publicity, translation and publishing opportunities for Latvian literature in the English speaking world. Last year, to celebrate this event, Latvian Literature team launched the #iamintrovert promotional campaign, presenting Latvia as a nation of introverts. Latvian exhibition stand at the London Book Fair 2017 featured an introverted writers' coat rack with quotes from Latvian authors; a special series of video interviews were conducted with Latvian writers and poets; and artist Reinis Pētersons introduced a comic strip about the daily adventures of the introverted writer I.  You're welcome to follow our campaign activities on the Latvian Literature's Facebook page.