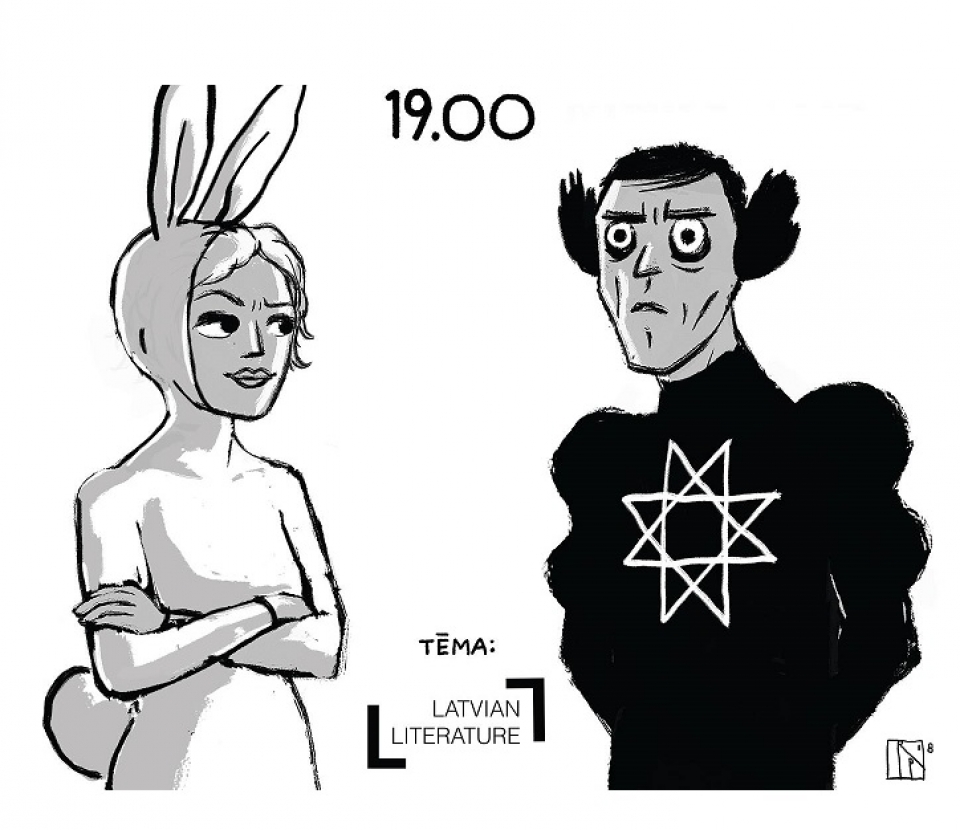 22nd December,  7:00 p.m, at the “Tu jau zini Kur” concert hall, the first ever Latvian Introverted Carnival will be held. The guests are invited to dress up as Latvian literati and characters from Latvian literary works.

“This has been a huge year for Latvian Literature. Latvian books have crossed the boarders of many countries in such short time. It would be a shame not to celebrate all the achievements. We believe there is only one way to get introverts assemble for a social gathering voluntarily — a masquerade. Let’s pretend it’s not us. Let’s dress up as Latvian writers and our favourite heroes from books and pretend we are them. Won’t it be great to see Sudrabu Edžus meet Nora Ikstena, Cibiņš, and the fisherman’s son, and enjoy an unforgettable evening together!” the event description states.

During the carnival, DJ Ģirts Šolis and his video discotheque will be making sure the party guests are having plenty of fun, and unlimited amounts of champagne will be served to all. The most poetic band in Latvia, whose name will stay a secret for now, will be performing at the venue. Unique honorary pennants will be awarded to the best group and individual costumes of the evening, and  #iamintrovert quote coats will be but up for auction. The coats have their special story - they were part of Latvia’s exhibition at the London Book Fair, were held in Norwegian customs for a month, visited the Frankfurt Book Fair, and are currently on a lookout for permanent owners. “We can and must celebrate this year’s achievements in Latvian literature. Everyone who followed the #iamintrovert campaign events should disguise themselves, come together and share the joy of having such wonderful, excellent Latvian literature,” notes the organizer of the carnival and the author #iamintrovert concept, Una Rozenbauma.

Several public figures have already expressed their support for the event, and revealed the masks they are planning to wear in the carnival: actor, Igors Šelegovskis from the National Theatre will be dressed as the ringneck snake from the Latvian folk tale; director of the Latvian Fashion Chamber, Dita Danosa will be channeling Spīdola from Andrejs Pumpurs’ epic poem “Lāčplēsis”; fashion designer Iveta Vecmane will be the Femme Fatale from Edvards Virza’s poem; musician Sniedze Prauliņa will be attending as Kārlis Skalbe’s Maiden of North, writer Inga Gaile will dress up as herself, poet and brewer Krišjānis Zeļģis will be in the guise of Sprīdītis from a Latvian folk tale with the same title, actress Jana Čivzele will be the Unknown One from Jānis Ziemeļnieks’ poem, writer Svens Kuzmins will come disguised as the Golden Horse from Rainis’ famous play, creative director Una Rozenbauma will become the renowned poet Austra Skujiņa, photographer Ģirts Raģelis will embody Jānis from Jānis Joņevs’ successful novel “Jelgava 94”, sworn advocate Mārtiņš Knipšis will be dressed as writer Andra Neiburga, and the most awarded brand strategist in the Baltics, Kristaps Siliņš will transform into the Fortune Bear from Andrejs Upītis’ novel “The Boys of Moss Village”.

The event is supported by the wholesaler of alcoholic and non-alcoholic beverages Tribaltic.lv Ltd.