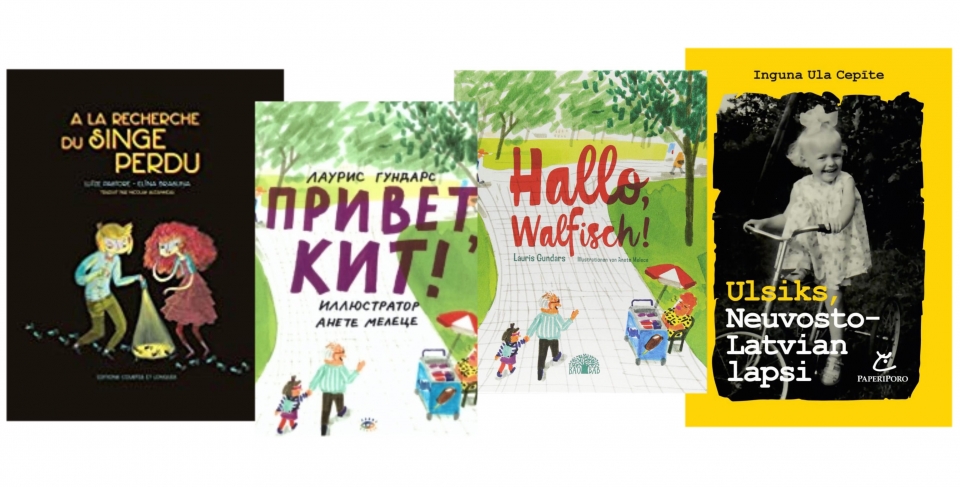 New translations of Latvian stories for children have been published in Finland, France, Germany and Russia.

“Ulsiks, Neuvosto-Latvian lapsi” (“Ulsik, the Soviet-Latvian Kid”) is a seemingly simple yet subtly heart-rending tale of childhood memories showing life in the Soviet-occupied Latvia during the 1960s and 1970s. Written by Ingūna Ula Cepīte, published by Paperiporo and translated into Finnish by Mirja Hovila, this book explores how the bitter secrets of the Soviet dictatorship occasionally invade the childhood world of a small, inquisitive, mischievous girl named Ulsiks. With the help of her father’s vast cultural knowledge, the immense Song Festival choir conducted by Ulsiks’ mother’s learned hand, and the many renowned figures from the art world (although known to the child only by their nicknames) – all the curious characters surrounding the girl – the cultural DNA of the nation is kept safe, and so is little Ulsiks and her childhood.

Editions Courtes et Longues has published the first book in Luīze Pastore’s “Art Detectives” series “À la recherche du singe perdu” (“The Lost Monkey”), illustrated by Elīna Brasliņa and translated into French by Nicolas Auzanneau. These detective stories invite children to explore the behind-the-scenes of art by immersing themselves into the adventurous and mystery-filled world on the other side of paintings. Can a work of art come alive? What would it be like to step inside a painting and experience the story it tells? In this exciting series of adventure books, young detectives Theo and Button follow the trail of art, investigating the mysteries behind some of the works of the greatest Latvian painters. In “The Lost Monkey”, Theo and Button meet at a lavish party.  Button claims that a fine painting depicting a pampered princess is supposed to feature a little monkey which has somehow vanished from the painting. Miraculously, Theo and Button find themselves on the other side of the painting in the world of art in search of the lost monkey. In a whirlwind of exciting events, the little detectives find out who the princess shown in the picture and her playmate actually are.

Lauris Gundars’ “Hello Whale!” illustrated by Anete Melece was recently published by Baobab Books translated in German by Matthias Knoll as “Hallo Walfisch!” and in Russian by Petr Volcit as “Привет, Кит!”, published by OOO Al. The main characters of the story Whale and Buzzfly spend a lot of time together, but there is one question bugging Buzzfly: why does Whale never say hello to others, even her friend's grandmother whom they meet almost every day? Following a long discussion about the importance of greeting others, Whale has to admit Buzzfly is right and Whale should start saying hello, but he is just too shy. It is now Buzzfly's responsibility to teach Whale how to greet others, not the easiest of tasks: they decide to start small by greeting cats, cars and houses before Whale is brave enough to say hello to another person.