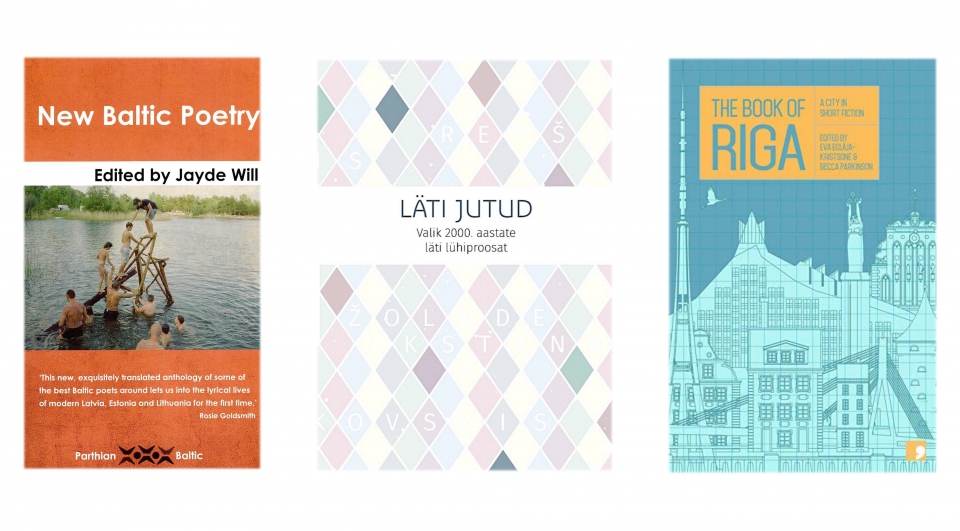 More literary works of Latvian authors have been published in English and Estonian.

“The Book of Riga. A City in Short Fiction” by Latvian authors has been translated into English by Māra Ziemelis, Žanete Vēvere Pasqualini, Kaija Straumanis, Suzanne McQuade, Ieva Lešinska and Uldis Balodis, and published by Comma Press. The stories by Pauls Bankovskis, Ilze Jansone, Arno Jundze, Sven Kuzmins, Vilis Lācītis, Andra Neiburga, Gundega Repše, Dace Rukšāne, Kristīne Želve and Juris Zvirgzdiņš chronicle growth and the ongoing transformation of Riga. They offer glimpses into dark humour, rich history, contrasting perspectives, and love of the mythic, which set the city’s artistic community apart. As its history might suggest, Riga is a work in progress; and for many of the characters in these stories, it is the possibilities of what the city might become, more than merely what it is now, that drive the imagination of its people.

“New Baltic Poetry” is an anthology of voices from Lithuania, Latvia and Estonia, edited by Jayde Will, translated into English by Rimas Uzgiris, Ieva Lešinska, Adam Cullen, Jayde Will, published by Parthian Books. It is a vibrant expression of new work, ranging from the familiar to the startling, from the lyrical to the experimental. Featuring the works of Latvian authors Anna Auziņa, Arvis Viguls, Inese Zandere, Katrīna Rudzīte, Māris Salējs and Uldis Bērziņš, this anthology celebrates the diversity of Baltic writing, in terms of age, gender and background to offer a new and refreshing perspective.

“Läti Jutud”, translated into Estonian by Livia Viitol and published by Libri Livoniae, consists of short stories by ten Latvian authors selected within the context of Latvia’s Centenary. Inga Žolude, Andra Neiburga, Gundega Repše, Inga Ābele, Nora Ikstena, Aivars Kļavis, Sven Kuzmins, Vilis Lācītis, Linards Kalniņš and Pauls Bankoviskis offer their stance on the main themes in this anthology – time, place, human relations, and the cross-cutting themes of love and identity. These stories cover different periods in Latvian history, dating back to the beginning of the national cultural independence in the early 20th century, securing independence in the mid-1920s, and human interactions in the capitalist 1990s and 2000s.