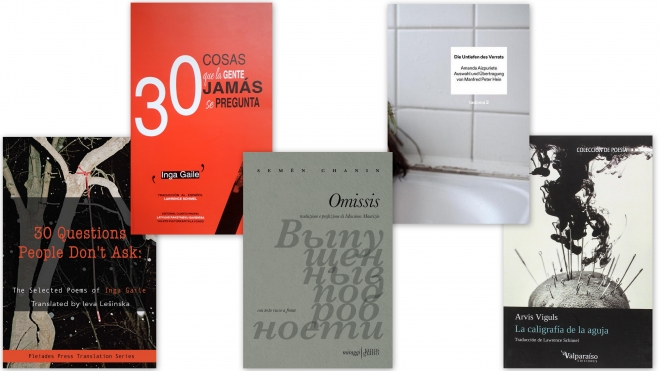 In addition to prose and poetry, Inga Gaile also writes plays and screenplays. She does stand-up comedy too. She often represents Latvia abroad, partaking in different literary events such as the prestigious literature and art festival Hay 2017 in the UK, and elsewhere. A quote from her writing, “Let’s call it love / There’s probably no better word for it”, appeared on the special series of #iamintrovert t-shirts by Latvian Literature. Most recently, her selected poems were published by the US’ Pleiades Press under the title, 30 Questions People Don’t Ask, translated by Ieva Lešinska. The previous German, Swedish, Lithuanian and Bengali translations have now been supplemented with her selected poems in Spanish, 30 cosas que la gente jamás se pregunta, translated by Lawrence Schimel and published by Editorial Cuarto Propio in Chile.

Poet, translator and literary critic Arvis Viguls was named among the ten most interesting young European writers at the 2017 London Book Fair, making it into the New Voices of Europe selection. For his first collection, Room (1/4 Satori, 2009), Viguls received the annual Latvian Literature award in the best debut category. Alongside translations in other languages, a selection of his poems in Spanish, La caligrafía de la aguja appeared recently under Valparaíso Ediciones. It was translated by Lawrence Schimel. A quote from his writing, “is there life after youth?” likewise appeared on t-shirts of the #iamintrovert campaign.

The selected poems of poet and translator Amanda Aizpuriete have appeared in Germany with the Ink Press publishing house and the title Die Untiefen des Verrats. It was translated by Manfred Peter Hein, Margita Gūtmane, and the author herself. Aizpuriete’s poems have been translated into more than 14 languages and has been included in poetry anthologies alongside works by other Latvian poets, such as Werde zum Gespenst, published in 2016 in Germany, and the Terra Mariana anthology in Georgia.

Italy’s Miraggi Edizioni have meanwhile published Semjons Haņins’ (aka Aleksandrs Zapoļs) selection of poems, Omissis. Haņins writes in Russian, translates from the Latvian to Russian, and has edited many collections of poetry. He’s a poet of the Orbīta text group, and his works have appeared abroad both individually and as part of the Orbīta poets, in places that include the UK, Germany, the Czech Republic, Ukraine, and Italy.