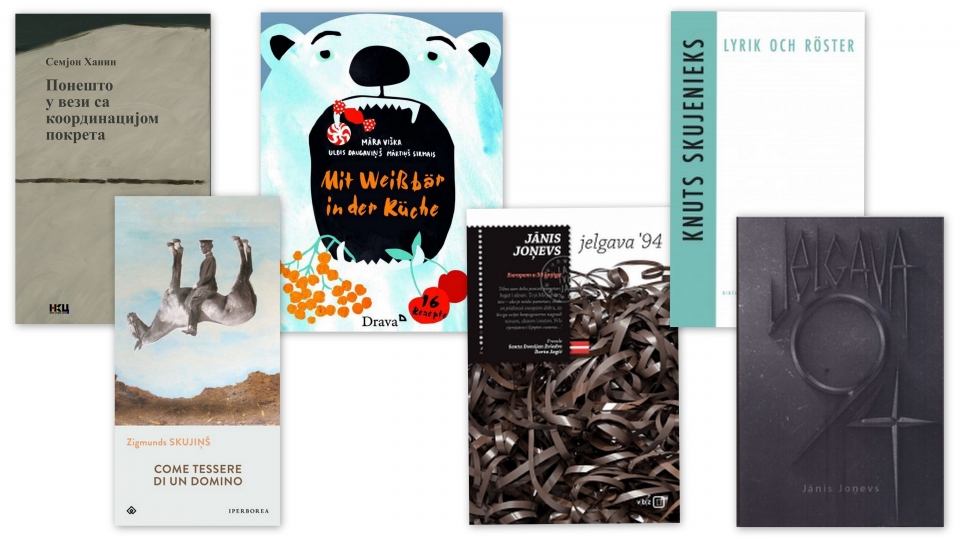 Readers around the world seem to be equally interested in Latvian classics and the most recent best sellers, as well as translated books of our young authors. Zigmunds Skujiņš’ novel “Flesh-Coloured Dominoes” (Miesas krāsas domino), translated and published recently in several languages, is now also available in Italy. Sweden has published a book of poems by Knuts Skujenieks, titled “Voices and Lyrics” (Lirika un balsis), and poet Semyon Khanin has seen his collection published in Serbian. The popular and critically acclaimed novel “Jelgava 94” by Jānis Joņevs has just been published both in Estonia and Chroatia, and a translation of Uldis Daugaviņš and Mārtiņš Sirmais’ “White Bear’s Cooking Adventures” (Baltais lācis. Pasaku pavārgrāmata bērniem) has been added to the shelves of children’s literature in Germany.

Zigmunds Skujiņš novel “Flesh-Coloured Dominos” (Miesaskrāsas domino, Preses nams, 1999) has been translated in Italian by Margherita Carbonaro as “Come tessere di un domino”, and published by publishing house Iperborea. Zigmunds Skujiņš, who celebrated his 90th birthday last year, is one of the most widely translated Latvian writers. The Italian edition of the book has been met with praise and great admiration by the readers, proving to be a wonderful birthday and Christmas present to the Latvian author. In her review of the book, journalist and translator Alessandra Iadicicco comments: “When you get your hands ona a book like this ends, you should thank the heavens that there still are authors and works of literature of such high merit. The novel is truly to be read with pleasure. Its 360 pages can be gulped down greedily, and even the most sophisticated gourmands will experience a long and mouth-watering aftertaste.”“Flesh-Coloured Dominos” is considered Zigmunds Skujiņš’ opus magnum, has been incuded in the extended list of the Latvian Cultural Canon, and is a great introduction of Zigmunds Skujiņš and translator Margarita Karbonaro to the Italian readership.

Swedish publishing house Bokforlaget Edda has published another collection of Latvian poetry in the Green Series – Knuts Skujenieks’ “Voices and Lyrics” (Lirika un balsis, Liesma, 1978) has been translated into Swedish by Juris Kronbergs with the title “Lyrik och roster”. Skujenieks is one of the most prominent Latvian poets and translators, revered by many authors of his own and the following generations, and is regarded as a key intellectual figure in Latvian culture.

Semyon Khanin (known also as Alexander Zapol, 1970) is a poet writing in Russian, a translator of Latvian poetry into Russian, and editor of numerous poetry collections of Russian and Latvian poetry. His collection of poems, translated by Mirjana Petrović Filipović, has just been published with the title “Ponešto u vezi sa koordinacijom pokreta” in Serbia by the Niškog kulturnog culture centre. Semyon Khanin is one of the key members of the Orbita multimedia group and many of his works have been published and translated abroad in various anthologies as part of the Orbita project.

Jānis Joņevs debut novel "Jelgava 94", first published in 2013 by the publishing house Mansards, took the Latvia’s literary world by storm, and received the Annual Latvian Prize for Literature for Best Debut, as well as the prestigious European Union Prize for Literature, and the Kilogram of Culture Award given by the Latvian television programme "100 Grams of Culture". The book is a simple, unassuming and witty story on growing up in the 1990’s Jelgava – one of the towns in Latvia most affected by the Second World War. Next to the previously published translations in French, Norvegian and Slovenian, this cult book is now available also in Estonian, translated by Miks Viesturs Grīns, published by Randvelt Kirjastus, as well as Croatian in Santa Domijan Zviedre`s translation, published by V.B.Z. d.o.o.

Last but not least, the German publishing house Drava Verlag has released the children's book "White Bear’s Cooking Adventures" (Baltais lācis. Pasaku pavārgrāmata bērniem, Liels un mazs 2017) in German under the title “Mit Weißbär in der Küche”, written by Uldis Daugaviņš and the renowned chef Martins Sirmais and illustrated by Māra Viška. This exciting picture book is a story for children and adults that is guaranteed to take you on an adventure in the kitchen. A fun meal is not the final goal of this book, but rather the point of departure, and besides some healthy eating advice, it offers a wider, more inclusive worldview, and invites the readers to have a creative attitude towards their everyday lives. This illustrated cook book is one of the 10 works shortlisted for the prestigious International Baltic Sea Region Jānis Baltvilks Prize in 2017.