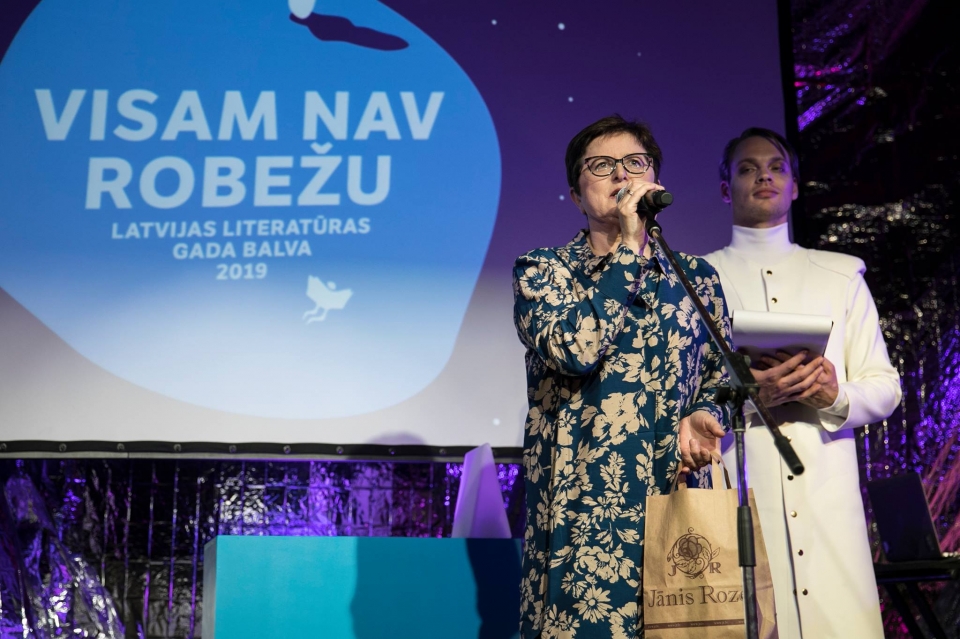 Thursday, 25th April, 18.00pm, at the Sūkņu Stacija venue (Riga, Maskavas iela 196), the Annual Latvian Literature Award (LALIGABA) ceremony was held. Winners in the five main categories were announced, the Special Prize was awarded to the authors of the Livonian bilingual poetry collection "Trillium”, and Lifetime Achievement Award was presented to the renowned London based Latvian poet and translator Velta Sniķere.

The panel of experts decided to award Uldis Bērziņš in the Best Poetry Collection category for „Idilles” (“Idylls”), published by „Neputns”, edited by Kārlis Vērdiņš. Learn more about the author and his book here.

The Best Work of Prose award went to Māra Zālite and her novel ”Paradīzes putni” (“Birds of Paradise”), published by „Dienas Grāmata”, edited by Gundega Blumberga; Learn more about the author and her book here.

The category of Best Translation of Foreign Literature was won by the Latvian translation of the Estonian epic poem “Kalevdēls” (“Kalevipoeg”) by Guntars Godiņš, published by „Neputns”, edited by Sandra Godiņa and Antra Bula; Learn more about the translator and his book here.

The award for Best Original Children’s Literature went to Lilija Berzinska’s book „Skelets skapī” (“Skeleton in the Closet”), published by „Dienas Grāmata”, edited by Gundega Blumberga; Learn more about the author and her book here.

„Best Debut” went to what was voted as the most promising new arrival in Latvian literature – Haralds Matulis for his collection of stories “Vidusšķiras problēmas” (Middle Class Problems), published by „Mansards” and edited by  Arvis Kolmanis. Learn more about the author and his book here.

The winners were awarded LALIGABA Lamps, designed by MĀJO studio, and awarded 1500 EUR prize money. Laureates in all categories also received a subscription for the literary magazine  “Domuzīme” for 2019.

The LALIGABA Special Prize was awarded to a special contribution to the Livonian literature – the bilingual collection of poems "Trilium / Trillium” in Livonian and English, written by Baiba Damberga, Valts Ernštreits and Ķempju Kārlis, translated into English by Uldis Balodis and Ryan Van Winkle. The collection was published as part of Latvia’s Market Focus programme in the London Book Fair 2018 by the „Līvõ Kultūr sidām” cultural centre. 750 EUR were awarded to the centre towards supporting the promotion of Livonian culture. Learn more about the collection here.

This year the recipient of the Lifetime Achievement Award is the esteemed poet and translator Velta Sniķere. A sum of 3000 EUR was awarded for exceptional and irreplaceable contribution to Latvian poetry and translated poetry. The author reveals in her poetry readings the synergy of words through symbolic hand gestures, known in the tradition of yoga as mudras. Poet and yoga instructor Velta Sniķere’s work is sometimes compared to mantras, capable of exploring the essential interconnectedness of all things through laconic and precise use of linguistic means. Velta Sniķere has translated into English many a Latvian author, including Andrejs Eglītis, Vizma Belševica, Zinaīda Lazda, and others. In 2019, Sniķere’s translation of Latvian folk songs “Dainas” was published in English. Read more about the poet here.

News site „Delfi” organised a poll in which readers chose their favorite book – Guntars Godiņš translation of the Estonian epic poem “Kalevipoeg”; and Māra Zālite’s novel “Paradīzes putni” (“Birds of Paradise”) was recognized by the Bookstore chain „Jānis Roze” to be the best selling book among the works nominated for the Annual Latvian Literature Award last year.

This year was the first time for the Anward organizers to collaborate with literary boggers by announcing a book reading and reviewing competition. LALIGABA celebrated the exemplary blogs and reviews by Līva Alksne, Austra Pudāne, the Caelum Book Club, as well as a group of the Riga French Lycée students, lead by their teacher Lita Silova.

The moto for 2019 Awards was „No Limits to Anything”, emphasizing the limitless journey of imagination into the vast space of literature. The visual identity for this year’s award was created by artist Mareks Hofmanis. The event was curated and scripted by publicist Anete Konste, stage and film director Marta Elīna Martinsone, architect and scenographer Ivars Veinbergs, scenographer and costume designer Sintija Jēkabsone. The ceremony was hosted by actors Inga Alsiņa–Lasmane and Gatis Maliks, guests also enjoyed cosmic intermedial performances by Sniedze Prauliņa.

Learn more about all nominees, recipients of the Special Prize and the Lifetime Achievement Award here.

The award is organized and put together jointly by the International Writers’ and Translators’’ House, and the Latvian Writers’ Union.