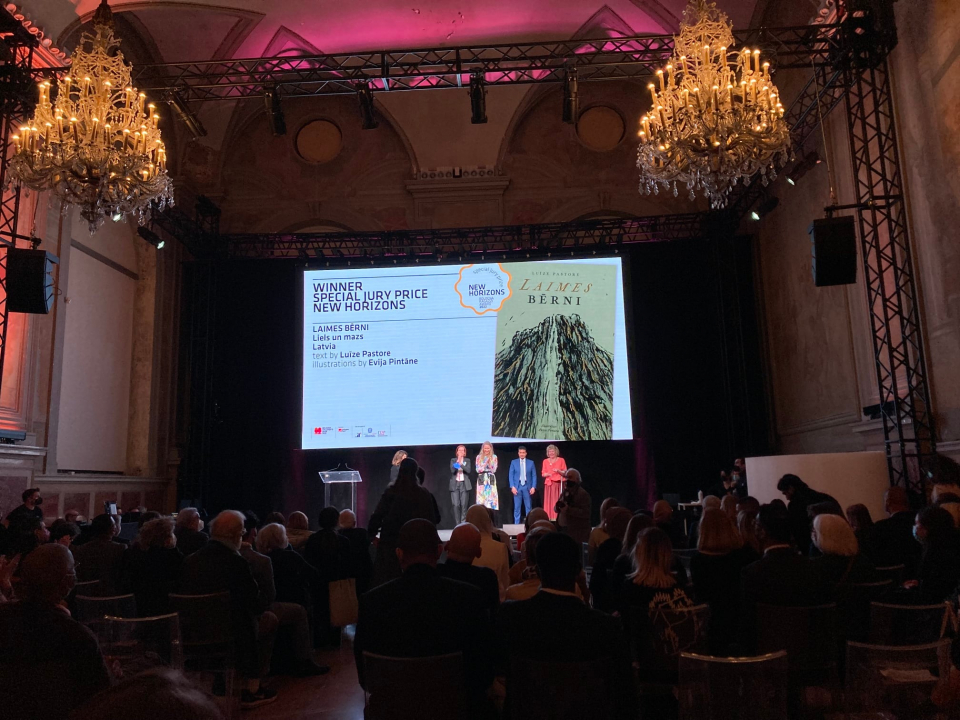 The Bologna Prize for the Best Children’s Publisher of the Year acknowledges the best publishing houses for their high level of professionalism in carrying out innovative children's book projects of high intellectual merit.

Annually, publishers who have most distinguished themselves are nominated for the award in each of the six regions of the world - Europe, Asia, Oceania, Africa, Central/South America and North America. Five publishing houses from each region compete for the award in the final round. This year, in the European shortlist, the Latvian Liels un mazs was competing for the title with two publishing houses from France, a publishing house from Russia, and one from Poland. The nominated publishers are selected by the registered members of The Bologna Children's Book Fair.

This year marked the 10th anniversary of the award. It was also the 5th consecutive year when Liels un mazs was nominated for the prestigious award and the first time when the publishing house received it.

It was not the only award Liels un mazs received this year at the Bologna Children’s Book Fair; the book "Laimes Bērni" ("The Children of Joy") by Luīze Pastore, published by Liels un mazs publishing house, received the Bologna Ragazzi Award - New Horizons. This award is given each year to a book that demonstrates outstanding creativity and novelty.

This year, the publishing house Liels un mazs is celebrating its 18th birthday. Since its inception in 2004, Liels un mazs has set out to develop and enrich the domain of Latvian children’s book publishing. Liels un mazs strives to create an alternative choice among Latvian children's books, not only through the content - high quality texts and contemporary illustrations, but also by novel printing and design techniques, this way expanding the reader's literary and artistic tastes.

Since 2014 Liels un mazs has been very successful in the international market. Since then, more than 90 contracts for 36 titles have been signed globally with the intention of translating and publishing books in 25 languages. Recently, new translation copyright deals have been signed for children's books, like "Kiosks" ("Kiosk"), a picture book by Anete Melece, to be published in Portuguese and Russian. Picture book "Kate, Kas Gribēja Kļūt Par Vectēvu" ("Kate who Wanted to be Grandpa") by Signe Viška and Elīna Brasliņa will be published in German, Czech and French. "Sveiks, Vali" ("Hello, Whale"), a story by Lauris Gundars, will be published in Chinese, picture book "Eju Meklēt!" ("Ready or not, here I come!") by Līva Ozola will be printed in French, and two books - "Dorabellas Istaba" ("Dorabella's Room"), written by Dace Kravale and illustrated by Vivianna Maria Stanislavska, as well as the picture book "Nepaklausīgais Vectēvs" ("Disobedient Grampa") by Rebeka Lukošus – in Arabic.