Anna Brigadere (1861–1933) was a Latvian writer, playwright, and poet. Her first story Slimnīcā/At the Hospital was written around 1893, and published in 1896. In 1897, Brigadere turned her focus exclusively to literary work, and her first book Vecā Karlīne/Old Karlina was published. Six years later, her first and most popular play Sprīdītis/The Tale of Sprīdītis was written for the Riga Latvian Theatre director Jēkabs Duburs who staged the play in 1903. In 1985, the story was adapted for cinema, translated in several languages. 1906 – 1907, Brigadere was a language teacher in a girls' pro-gymnasium, later worked for the literary and satirical supplement Skaidiena at the Latvija newspaper. In 1915, Brigadere fled to Moscow where she wrote her poem Spēka dēls/The Son of Might. In 1917, she returned to Latvia and spend most of her summers in the Sprīdīši property, posthumously turned into a museum in her honour. The stories she wrote later in her life, along with some translations, were published in a collection Klusie varoņi/ The Silent Heroes (1933). She spent years between 1926 and 1933, writing her autobiographical trilogy:  Dievs, daba, darbs/God, Nature, Work (1926), Skarbos Vējos/During Wild Winds (1930), and Akmeņu sprostā/In a Stone Trap (1933). This trilogy is seen by critics as the writer's greatest literary contribution, however many of her works and translations are now part of Latvian literary and storytelling classics, and have significantly shaped the contemporary fairy-tale tradition. In 1926, Brigadere was awarded the 3rd class Order of the Three Stars, and Anna Brigadere Prize was re-established in 1986 to celebrate achievements in Latvian literature. 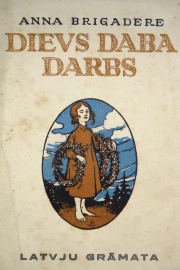 The first part of Anna Brigadere’s autobiographical trilogy 'God. Nature. Work' is a psychologically nuanced portrayal of a servant girl named Annele and the way her character develops as she comes to understand the world around her. This story reflects the author’s own childhood memories, of when she first learned about the word of God, the natural world around her, and everyday work. Annele comes from a servant family. Each year on Jurģi (St. George’s Day) they move to a new home and therefore also into a new world. The people she encounters leave a considerable impression on Annele. As she comes to understand life’s truths and encounters injustice, so she begins to grow up. She learns about holiday traditions and the patterns – as well as, in her opinion, the oddities – of adult life.

Brigadere’s memories reveal a small child’s innocent view of life, which can, at times, bring both tears of joy and sadness to the eyes of the reader. For example, Annele is out on a visit and is given a slice of bread and honey – a food seen as a great treat. However, Annele doesn’t like the taste of it and leaves the bread by a fence. When she returns, she tells the lady of the house that a dog snatched the bread out of her hands. The lady comforts the little girl and, as a consolation, gives her a new slice of bread and honey.

Along with its realistic and gripping portrayals of country life at the turn of the twentieth century, modern-day readers enjoy Brigadere’s expressive language in Dievs. Daba. Darbs, in which Annele describes everything she sees and hears simply, without pretension, and in a heartfelt way.

1932, The Culture Fund Prize for In the Harsh Winds