Jānis Lejiņš (1954) is one of Latvia’s pre-eminent authors of historical novels. His trilogy Zīmogs sarkanā vaskā [A Seal in Red Wax] earned popularity among readers as one of the most widely read works of this genre in Latvian literature as well as a number of prizes, including the Kilograms Kultūras Award as the year’s major event in literature. His screenplays for TV dramas are also highly regarded. 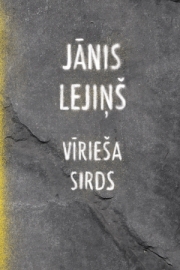 A Man’s Heart meets the criteria of “historical novel”, however, like other novels by Lejiņš, it has multiple layers, making it more than just a formal portrayal of the period. In the novel, author Jānis Lejiņš turns to the history of 20th-century Latvia. At the centre of the tale is a modest and to some extent comic Švejklike character Ludis Šteinbergs, who shows up at a Latvian small town secondary school in spring 1939 to teach boys how to become real men and is naively overconfident in his own infallibility. Soon enough the unexpected occurs: into the perfect man’s carefully cultivated bachelor world, a femme fatale enters. Yet along the way the ominous mill of fate of the mid-20th century has already begun to turn, ready to annihilate anyone who may get caught between the millstones. Since the novel begins in 1949 with authorities erecting a monument to Šteinbergs as a hero who fell in  “the struggle against Fascism”, the reader must guess the answer to the question: who is this person really – an insignificant pawn in the great games of the 20th century, or someone whose essential nature is easy to overlook? The novel follows the life of Šteinbergs for several decades: he is the leading figure against a background of two major wars and the interwar period, which features other characters as well, starting with the General Secretary of the Soviet Union and ending with a meticulously crafted network of spies in several countries. A Man’s Heart offers the reader a psychologically realistic story rich in documentary fact in which there is witty humour as well, and the author, with a smile, often pokes fun at the stronger or weaker aspects of human nature.

2009, the Annual Latvian Literature Award for A Seal in Red Vax III. Runes

2004, the Annual Latvian Literature Award for A Seal in Red Vax II. The King