Augusts Deglavs (1862—1922) is considered one of the foundational figures of novel-writing in Latvian literature. He was born at Vīganti homestead in Šķilbe parish (Jelgava County). His parents owned a farm where the author worked in his youth. He completed Auri Parish School, lived in Rīga, and worked at the Augusts Dombrovskis sawmill in Vecmīlgrāvis. He worked at several newspapers, was a civil servant, and was involved with the Rīga Latvian Society and the “Auseklis” temperance society. He gained notoriety in 1891 when the newspaper “Baltijas Vēstnesis” published his story “Vecais pilskungs” (The Old Manor Lord), which was about life during the period of corvée labour in Latvia. From this point onward, Deglavs was primarily a writer and journalist. After the First World War he was the editor of the St. Petersburg newspaper “Jaunā Dienas Lapa” and later was actively involved in the founding of the Latvian Democratic Party (1917). He died of tuberculosis in Rīga. 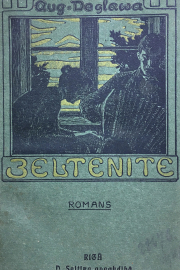 The main character, Anna Zeltenīte, is a seamstress living on the outskirts of the city. The novel describes the tragic events in the final year of her life, as she falls hopelessly in love with an undeserving lad working at a factory. Anna is not dissimilar to Don Quixote in her role as a “good character” struggling against the evil world. The novel is filled with images of everyday material poverty, as well as the intellectual emptiness of the lives of the workers and other common folk with their cynicism and broken dreams – all of it commonplace in the world in which the author lived.

Is the novel’s sweet-sounding name meant to serve as a contrast to the harsh realities depicted within its pages? Or does it instead suggest the destiny of the less powerful? This novel is the story of Zeltenīte and people who lived lives like those of Deglavs’s contemporaries: individuals who were not powerful, but struggled to be on the same level as those “up top”.

As an observant publicist and emerging writer, Deglavs was troubled by what he saw when he moved from the countryside to Rīga. He depicts with unvarnished detail the vices he encounters – drinking, violence, general moral decay. His contemporaries acknowledged the author’s skill in writing honestly about his time without holding back and considered this to be Deglavs’s best work and one of the most lasting works of Latvian literature (A. Upīts, Ritums, 1922), while also highlighting the focused and dynamic language he employs in his prose (H. Lejiņš, Jaunā Gaita, 1969).