Jānis Poruks (1871–1911) was born in Prēdeļi in Druviena parish (located in present-day Gulbene municipality). His father was the head of the parish and his family owned a farm. He studied at Druviena Parish School, Liezēre Church School, Cēsis City School, all the while immersing himself in world literature. Poruks was a talented and pleasant young person, and as a result he secured the support of Rīga Polytechnic School docent Hermanis Vestermanis, who helped Poruks financially as well as giving him advice during his search for a private school and, later, while he was studying music in Dresden. While abroad, Poruks enjoyed not only art but the company of interesting people. He went on to study chemistry in Rīga but was discharged during a period of student unrest, and so instead found work as a civil servant and in business. At the end of the century, he began to work intensively on his writing; however, 1904 was the year that marked the start of Poruks’s decline. His daily routine was disrupted and he was suffering from a mental illness which led him to seek treatment at several psychiatric clinics until he died suddenly at Wladimir Tschisch’s psychiatric clinic in Tartu.

Poruks was one of the first to write in Latvian about Nietzsche’s ideas. His book Nākotnes reliģija (Religion of the Future) focused on these ideas and was also published in German in Berlin. His novella Perpetuum mobile (1894) came about as a result of his studies on contemporary philosophical thought, and he is seen as having had an especially broad creative range compared with other Latvian writers. Poruks includes in his work concepts from Christianity to Nietzscheanism, from rich fantasy to the stark realities of everyday life. He wrote novels, short stories, novellas, poetry, and other works, and is considered to be one of the foundational figures of Latvian romantic prose. He also developed several Latvian literary archetypes: pure-hearted folk, “pearl divers”, pale lads, and others. 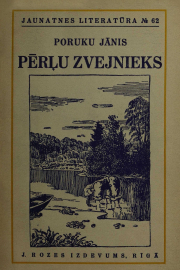 The Pearl Diver, which the author described as fantasy, is one of the earliest long prose works by Poruks. Its main character, Ansis, is from the countryside and comes to Rīga to study. He is passionate; a dreamer and an idealist. For Ansis, “pearl diving” means fulfilling your life’s goals: he wants to make his dreams come true, not just view them from a distance. But his life takes some difficult turns: his mother dies, he is unlucky in love, and he struggles with loneliness and, of course, the possibility that the world will never understand him. Ansis has no shortage of benefactors, including his mentor Talheims, his beloved Anna, and others. As the story progresses, Rīga comes to discover Ansis’s unique nature and he begins to meet new people. The moral of the story is that every reader has to find the “pearls” in their own life (there is also a theory that Poruks used “pearls” to refer to the hearts of good people). The story is partially autobiographical and in it Poruks appears to foresee his own fate. This story also contains a motif that was completely new to Latvian long-form prose: Ansis discovers not only the physical path he must take on his journey, but also the path to find himself.

This and other works by Poruks are characterised by the words he wrote in a letter to his fiancée: “I was the first to include the concept of modern art in the Latvian national element.” Literary specialist Viesturs Vecgrāvis compared Pērļu zvejnieks with Novalis’s novel Heinrich von Ofterdingen (1802) and Ludwig Tieck’s novel Franz Sternbalds Wanderungen (1796). Along with romantic elements, Poruks also weaves in reflections on the modern culture and philosophy of his time. This work is included in the Latvian Cultural Canon.