Jānis Veselis (1896–1962) learned most of what he knew about literature through self-study: before the First World War he studied German and French on his own, and when he was nineteen he experienced “a moment of clarity, oneness with the Universe” and began to take a deep interest in the ancient writings of various different cultures. As a result, he developed his own unique approach to literature, which he used in his own written works – prose, plays, poetry – as well as in his reviews. During Latvia’s first period of independence, Veselis was one of the most prominent prose critics and wrote about nearly all of the most prominent authors of the day.

In 1944, Veselis emigrated to Germany, where he had worked as an editor for the publishing house Latvju grāmata (Latvian Book) during the Nazi occupation. He left his wife Mirdza and their four children behind in Latvia, though they had been living apart even before then. In 1950, Veselis moved to the United States, where he worked as a door-to-door salesman for Latvian books.

His contemporaries characterised Veselis as a unique individual with a strong personality. At one point, his most popular work was a book of short prose inspired by Latvian myths: Latvju teiksmas (Latvian Tales; 1942), which is also one of the first works of distinctly fantasy-style prose in Latvian literature. More recently, readers have preferred his novels, especially Dienas krusts (The Day’s Burden; 1942). These novels are written in a fairly realistic style, but nonetheless the reader can sense the author’s interest in the mythical and primordial world and its influence on the life of individuals. 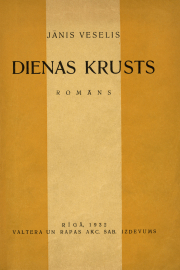 The Day’s Burden is one of the earliest and most important modernist works of Latvian prose, and was seen by the author’s contemporaries as having been inspired by James Joyce’s Ulysses. Veselis had also published a partial translation of Ulysses, as well as a discursive essay about it. The author Dzintars Sodums, who also translated Ulysses, has praised Dienas krusts highly, while Jānis Rudzītis named it in the Latvian refugee newspaper “Latvija” as one of Latvia’s best works of prose, with the greatest likelihood of receiving recognition outside of Latvia because “everything local in it is imperceptibly woven together with overarching themes and overlaid with a nuanced plot.”

The plot centres on a tragic love story, though fundamentally The Day's Burden is a deep examination of Rīga’s working classes. The book focuses on the intertwining lives of the residents of a tenement house over the course of 24 hours, during which several romantic dramas and personal crises arise and are resolved, occasionally overlapping with the comical events that occur each hour. These connections were very important
to Veselis, and to emphasise them he created horoscopes for all of the characters before writing the book.

The book’s publishers, “Valters un Rapa”, wrote: “Veselis has created a new vision of the city in Latvian literature, which, like a living organism with its chaotic motion down labyrinths of monotonous streets and alienation within buildings walls, can defeat and destroy a person’s individuality.”

1928, The Culture Fund Award for People of Fields