Writer Marģeris Zariņš (1910–1993) was a bright personality in the Latvian cultural world. Before he gained fame as a writer, he was already a respected composer, working as the musical director for one  of Latvia’s largest theatres – the Daile Theatre – as well as composing  the score for 16 films, including several screen adaptations of some  of the most recognised works of Latvian literature: Nāves ēnā (In the Shadow of Death), Purva bridējs (Marsh Crosser), Ceplis (Kiln), and others. Zariņš’s literary debut came in 1969 with a magazine publication, while  his first story collection Saulrietu violetās ērģeles (The Violet Strings of  the Sunset) was published in 1970. These stories were primarily about musicians and music. He gained more recognition for his later works, which are characterised by wry wit and light-heartedness, playing with themes found in other literary texts and genres. Zariņš often employed  a compilation method and combined texts with different styles and functions within a single book. For example, his novel Kapelmeistara Kociņa kalendārs (Conductor Kociņš’s Calendar; 1982) is structured like the titular calendar, consisting of various seemingly-unrelated literary, historical, and journalistic text fragments. This work is extremely reminiscent of Milorad Pavić’s famous work Dictionary of the Khazars. A similar principle is used in the short adventure novel Didriķa Taizeļa brīnišķīgie piedzīvojumi (The Marvellous Adventures of Didriķis Taizelis; 1978). 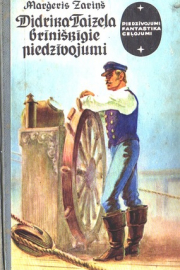 This is a short adventure novel, where the author employs a compilation method and combined texts with different styles and functions. 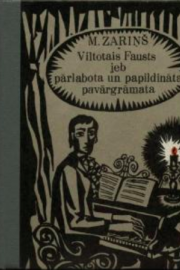 The novel The Counterfeit Faust or a Corrected and Expanded Cookbook gained great popularity and almost cult status among Latvian intellectuals and artists at the time. In it, the author plays with literary traditions and possibilities to an extent not seen before in Latvian literature. As in most of Zariņš’s other literary works, this novel contains elements of Postmodernism, which was also extremely important in Western literature at that time. These elements include breaking down the divide between “high” and “low” culture, playing with cultural heritage, and undisguised quoting/rephrasing/parody. The novel takes place in the 1930s and during the Second World War in Rīga, mostly among a mix of artists and intellectuals. The central character is a young writer and composer named Kristofers Mārlovs who goes to meet Trampedahs, a chef who is past his prime, to secure publication rights for  his new cookbook in exchange for the elixir of youth. As in Goethe’s story,  the beautiful Margarēta also appears in the novel, though later the author switches the roles of the characters around, turning Trampedahs-Faust into the villain while Mārlovs-Mephistopheles becomes a fragile victim. The novel contains a great deal of parody and self-parody, as well as actual historical figures and places which are merged with fiction. Real recipes are given an important position in the text. These and other features make it possible to call Viltotais Fausts a genuine example of Postmodern literature, though it is not known whether the author knew about this artistic movement when he was writing his novel.