Visvaldis Lāms (born Visvaldis Eglons, 1923–1992) was a Latvian writer and publicist. At the age of fifteen, following his father’s premature death, Lāms got his first job (he was a mechanic’s apprentice, locksmith, road worker, and also tried his hand at other trades) and continued to work – with occasional interruptions – for the next thirty years, even after his writing career began. In 1943, Lāms was drafted into the Latvian Legion. In 1946, Lāms was released from the NKVD screening and filtration camp. He devoted several of his works to this topic. Following the publication of Baltā ūdensroze (White Water Lily; 1958) and Kāvu blāzmā (In the Aurora’s Glow; 1958) in the literary journals “Zvaigzne” and “Karogs”, he became the target of ideological criticism. This criticism focused on “ideological errors”, the absence of “the role of the citizen”, becoming lost in “an obscure corner of life”, and the retreat from the mainstays of Socialist realism. As a result, Lāms was barred from publication for seven years. His novel Kāvu blāzmā was only published in its entirety in 1989. And yet, as Latvian literary critic Guntis Berelis observes, despite this ideological pressure, “Lāms was one of the few literary figures, possibly the only one, who wrote as if censorship did not exist. He knew, of course, that any heretical statements or free-thinking paragraphs would be struck from his novels – but he wrote them anyway.” Central to a number of Lāms’s books is the figure of the non-idealised man and his relationship to work, time, history, and life in general. Lāms wrote sixteen novels in total, and several short stories. 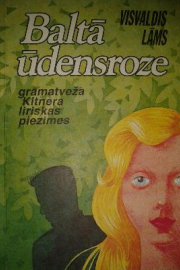 White Water Lily. The Lyrical Notes of Kitners the Accountant, one of Lāms’s significant early works, is a novel which can be used to pinpoint the beginning of modern Latvian prose, after the clichéd uniformity of Socialist realism. It tells the somewhat romantic – while also tragic, and even a  bit ironic – story of Kitners, an accountant, during a summer spent at  a collective farm near the Gauja River. The novel appears to describe everyday life under the Soviet regime, but it is important to note that it  is almost the only novel from the 1950s which can be read as a literary  text and not as a product of Socialist realism. Seemingly unremarkable everyday occurrences shed light on dramatic events from the past, and reveal the author’s deep respect for the individual’s subjective inner world of emotion and thought. The publication of Baltā ūdensroze in 1958 was received with a whirlwind of outrage, due primarily to one comical character – Baltbiksis – who is constantly explaining his views and sounds like he is quoting from a book of Socialist realist theory. Furthermore, Lāms clearly shows how Baltbiksis’s dogma falls to pieces when it encounters prose containing realistic psychological portrayals. This is where Baltā ūdensroze transforms from an outwardly inoffensive novel to a clear attack on the Socialist realist canon. Baltbiksis could be understood as a prototype  for the writers in this canon, and so many of these authors felt that they were being ridiculed in Lāms’s portrayal of Baltbiksis. A censored version of the book was published as part of the 1973 collection Raudze, but an uncensored version, newly edited by the author, was only published in 1992.