Following the end of the Second World War, the Latvian refugee author Ilze Šķipsna (married: Rothrock, 1928–1981) ended up in Germany, where her first literary work was published. Šķipsna was educated in Germany and the United States, receiving Masters degrees  in library sciences and anthropology. She spent the majority of her life in Texas in the United States. Her friends and contemporaries have written about how she always felt very close to the Latvian people as well as Latvian literature and language. Šķipsna spoke seven languages and published a small amount in English, but the majority of her literary work was in Latvian. She published two essay collections and two novels, and, following the publication of her first book, Šķipsna was already being described as a gifted young storyteller and the author of the first modern Latvian novel. She was drawn to themes relating to philosophy, psychology, and the existential problems inherent to the human condition. Her works can be seen as her attempt to find answers to the large and timeless questions in life, focusing on the problems associated with individuality, national identity, global interconnection, and meaning. 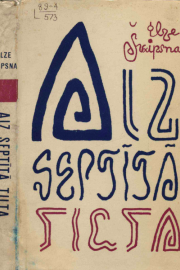 Beyond the Seventh Bridge

Ilze Šķipsna’s first novel Beyond the Seventh Bridge generated more interest among Latvian refugees than her first collection of essays. Literary critic Jānis Rudzītis described this work as the first modern Latvian novel, and its publication as an important event in Latvian refugee community literature. It signalled the arrival of a new generation of authors, and a movement towards the incorporation of existential and surreal elements into Latvian literary works. At the centre of this novel lies an inner or psychological conflict, with a rich subtext  of connections. There are few actual events in the novel and their role is insignificant: it is the author’s ruminations which are important, and these appear in the conversations of Edīte, Solvīta, and a few other characters. The chapters where Edīte’s opinion is most important begin with the letter E, while those where Solvīta’s opinion holds more sway begin with the letter S. Both characters speak in the first person and, ultimately, the reader comes to understand that they are the same. Edīte is introverted and finds it difficult to make real connections in life, whereas Solvīta – outwardly attractive and interested in life’s pleasures – has already married a rich American Southerner called Gerald Melvy. The plot of the novel grows primarily out of a string of various memories, moments of reflection, and emotions. The tension and dynamic of this work is generated by the constant back and forth between Edīte and Solvīta’s opposing perceptions of the world.

Beyond the Seventh Bridge