Eriks Ādamsons (1907–1946) was born in Rīga. He studied at the Rīga City Elementary School and Rīga Secondary School No. 1, where his literature teacher was the well-known Latvian writer Vilis Plūdons. He began his law studies at the University of Latvia and served in the Latvian Army.
While still a young writer, Ādamsons educated himself by immersing himself in Greek and Roman literature as well as in Latvian dainas (folk songs), fairy tales and legends. He read works by English, French, German, and Russian authors in their original languages. The artistic and ethical values of these works as well as Ādamsons’ immediate surroundings (Latvia’s natural landscape, the Rīga Old Town) were the author’s primary sources of inspiration. The beautiful, rare, and humble were transformed by Ādamsons’ imagination into poetry which never ceases to captivate.
Ādamsons was a prolific translator from English, Russian, German, and French. He was influenced by Charles Baudelaire and Knut Hamsun. Ādamsons’ works, especially his poetry, are characteristic of the rococo style, containing elements of the grotesque, irony, and ornamentalism bordering on Art Nouveau. In literature as well as in everyday life, fine details and pure artistic principles were of the utmost importance to Ādamsons. He was a fine aesthete who blended the comical with the serious. In his works he also did not avoid exotic details. 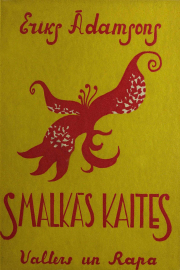 Subtle Afflictions is Eriks Ādamsons’ first and most significant collection of short stories. Each of the works in this collection follows the same theme, examining an individual’s neurotic psychological characteristics and offering a “window” into their inner world, its depths and hidden corners. For one individual it’s their obsessive cleanliness; for another it’s the realisation of the grey nature of their existence and their refusal to accept this fact. The idiosyncrasies of each character, which the author refers to as “subtle afflictions”, are not as obvious in everyday life and mostly highlight the main character’s “anti- hero” nature. The collection can be seen as a witty reinterpretation of the seven deadly sins for the short story genre.

1944, Rainis and Aspazija Award for On Their Own Path