Ilze Indrāne (born Undīna Jātniece, 1927) is a teacher, school director, writer, and playwright. Since the end of the 1950s, when her writing was first published and quickly gained popularity, she has been considered one of best Latvian writers of romantic prose, though she also received criticism from the Latvian refugee community for writing according to the Stalin-era principles of “immutable regularity”. Ultimately, Indrāne would win over her critics and become one of the most important contemporary Latvian prose writers, due to her ability to combine depictions of rural life with a lyrical and emotionally profound exploration of one’s inner world. These qualities spoke to readers beyond Latvia and, as a result, her works were translated into the languages of many other nations in the Soviet Union.

Though Indrāne’s works were written during two different periods – during the Soviet occupation and following the restoration of Latvia’s independence – they did not change in any significant way. Independent  of the political system, at the centre of each book is always the story of an individual, their life and experiences. She is the author of seven novels, four plays and nine books for or about children, as well as many stories, essays, and other works of short prose. Her novel Zemesvēzi dzirdēt (Hearing the Mole-Cricket; 1984) received the most attention and awards for its portrayal of country life during times of change. 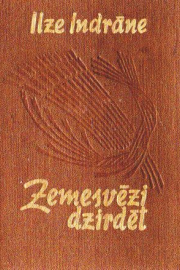 The novel Hearing the Mole-Cricket is a psychosocial portrait of the Dravnieks family across several generations, with a focus on Donāts, an old man with a vibrant and colourful personality. His memories, thoughts and dreams reveal the difficult lot of Latvian farmers as experienced by a single individual over the course of his long life. Through depictions of collective farm work and detailed, precise descriptions of even the most mundane tasks, Indrāne paints a vivid picture of the realities of life in Soviet-occupied Latvia as reflected by Donāts’ memories. All of this is expressed in the author’s characteristic emotionally-expressive style, combined with a rich layer of metaphor. At its core, the novel tells the story of the passing of the old generation of farmers (as personified by Donāts) and the arrival of a new generation along with a new set of values.