Andris Kolbergs (1938) is a Latvian writer and author of many celebrated crime novels. Since his first publication in 1965 he has become one of the very few, and certainly the most popular Latvian crime writers, and his works have been published abroad and adapted for well known films, such as The Photo of a Woman with a Boar in 1987, directed by Arvīds Krievs, and Defenders of Riga by Aigars Grauba. Kolbergs is a member of the Latvian Writers' Union since 1974. He has been the president of the Latvian Detective Fiction Association and worked as editor-in-chief of Atpūta magazine. More recently he has written and compiled several significant guide books about Riga. In 2011, Kolbergs received the Annual Latvian Literature Award for his lifetime contribution to Latvian culture. 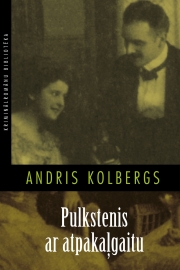 It’s 1919 in Latvia, a period of history brought to life by the master of the Latvian detective genre, Andris Kolbergs, with the expressive colours, flavourd, and scents of that time. A reckless yet cunning burglary targetting a jeweler, a freshly independent Latvia and the people defending it, the charm of Riga and its outlying areas,  riflemen, the Bermondt Affair, first love, corrupt cops, and the passions of the bordello, with a thrilling crime making the novel one that will completely capture your attention. 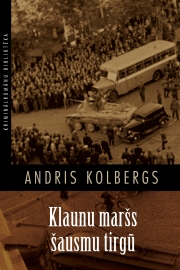 March of the Clowns in the Market of Horrors (2011) – which can be also read as a standalone work, this book is the sequel to the wonderful yet gripping historical detective novel Time in Reverse. Twenty years have passed, the Second World War is raging, and Latvia’s independence has been extinguished. The same heroes – grey-haired jeweler Mendels Davidsons
and his children, rifleman Ēriks Vāls and his beloved Hanna languishing in distant Germany, the refugee Alma and the skillful merchant Izraels Šermanis appear along with many others once more on a stage set by historical events. The Nazis rule Latvia, the Jews have been driven into the
ghetto, and everyone is desperate to stay alive. The heavy burden of the last years has pushed Latvia’s people to a breaking point, exposing and bringing their true qualities into clearer focus – qualities which in more peaceful times would have stayed hidden. A time of chaos and destruction
when jealousy, hatred, lust, and a thirst for glory go hand in hand with true sacrifice and love. 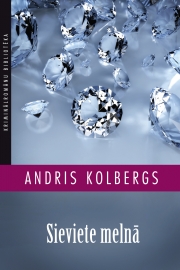 The Woman in Black (2011) is the final volume of the trilogy devoted to Latvia’s history in the 20th
century. Time in Reverse and March of the Clowns in the Market of Horrors told the story of the birth of Latvia and the Second World War, while this book introduces the reader to the day-to-day
realities of Soviet life. Former guerrilla fighters, Soviet veterans with memories of the front, rigged elections, and a young policeman who knows nothing of the culture or life during Latvia’s interwar independence, but still wants more than anything to find love and have recognition at work...however it is then that a mysterious woman in black appears, who brings with herself not just bad luck but also a giant diamond. The apple-green diamond has been moving for years from owner to owner, and as diamonds do, leaving in its wake dead bodies and ruined lives. Who will become the owner of this priceless stone? And what use is it in a country where the only real wealth exists in good relations with the party elite? Irony, extensive historical knowledge, and the ability to join events together into a thrilling and attention-grabbing tale are the reasons why Andris Kolbergs is deservedly called the master of the Latvian crime genre. 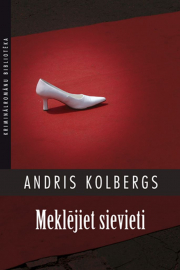 Don’t Call Me, Don’t Look for Me begins with the murder of Natālija Nolle, the assistant of a member of the Latvian parliament. However, the plot soon branches off into several directions, encompassing a vast array of issues affecting every social class across many decades. This includes parliamentary corruption, links between business, politics, the Mafia and Russian intelligence services, and other criminal matters.

The novel explores the political situation in Rīga and Latvia immediately after the restoration of independence in 1990. It transpires that Natālija Nolle was actually a talented Soviet spy, and a portion of the novel is written from her perspective. When Natālija’s beloved son joins the protests to fight for a democratic Latvia, their interests clash as the popular struggle over the formation of the new state rages on. They each come into contact with the nouveau riche and the criminal underworld, learning about the close links between the two in the new Latvia.

At the end of the novel, the investigator discovers that Natālija was murdered by the same member of parliament for whom she was working, but it is impossible to prove his guilt due to his high status. A repeat offender nicknamed Psychopath is blamed instead, and the investigator sees the parliament member’s name among candidates for the Latvian presidency.