Writer and journalist Aivars Ozoliņš (1957) studied at the Faculty of Foreign Languages at the University of Latvia. Renowned as one of the first Latvian postmodern writers, he made his debut in the late 1980s with a novella entitled Almost a Hundred (Gandrīz simts, 1989). His seminal work is the book Dukts (1991), a cult classic of Latvian postmodernism fiction, which had clear intentions to cast doubt on the entire purpose of fiction and writing. Dukts consists of several unconnected stories, varying in style and length, but all of an experimental nature, full of wordplay, puns, parody and references to other texts in the same vein as the work of Daniil Kharms and Donald Barthelme. The most popular is the titular story – a humorous and absurd parody about what is described as an eponymous mythical “game of gods that everyone can play.” Ozoliņš quit writing soon after the publication of Dukts and became a well-known political commentator. His works have been translated in Russian, English and Swedish. 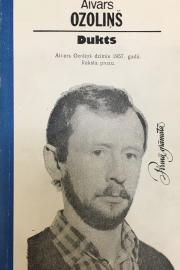 Dukts is the only book-length publication of Aivars Ozoliņš. It is an exemplary work of postmodernism, in which influences as wide ranging as Kharms, Kafka, Barthelme and Latvian nonsense poet Ņurbulis intermingle to create a unique blend of literature about nothing. Perhaps fittingly, after Dukts was published, which was soon followed by the short story Pasaka Nr. 13 [Fairy Tale No. 13], the author has not published any other work since, and has abstained from talking publicly about his writing. However, Dukts is one of the very few books with staying power from that heady era in Latvian literature when authors immersed themselves in all that had been previously forbidden or unwelcome. In 2014 the book was republished, and it is being enthusiastically discussed yet again at universities and dorm rooms all over Latvia. The book offers a kaleidoscopic mixture of characters, ideas and wordplay, mostly centred on the concept of “Dukts” – a word with no real meaning in Latvian. As the narrator explains in the book: “The essence of Dukts (although as of yet we’re not sure what it actually is) can be best portrayed by a single infinitely long, over-exposed film, which has to be seen instantaneously to be understood.” The book then details all the futile historical attempts to define or comprehend Dukts before showing the concept in practice with a brilliant series of surreal short stories.