Tom Crosshill (born 1985, real name Toms Kreicbergs) is a writer and financial adviser. He began his career in Wall Street investment banking. Crosshill first became known to Latvian readers with his collection of fantasy stories “Dubultnieki” (“Seeing Double”), published in 2011 by "Zvaigzne ABC". He recently received the European Science Fiction Society award as Best Author. He has been nominated three times for the Nebula Award, and once – for the Annual Latvian Literary Award. Tom Crosshill grew up in Riga, Latvia. Tom made his first writing friends at the Del Rey Online Writing Workshop in the late nineties. He travelled to the U.S. to study physics at Reed College, While living in New York he joined the writers’ group Altered Fluid. Toms Kreicbergs writes in English and publishes as Tom Crosshill. His latest novel is aimed at young adults, and tells a story about a young American teenager's journey to his motherland – Cuba. Romance, dance, and the crude reality of Tropical Communism intertwines with spy mysteries. The author draws on his own experience having lived in Cuba for over a year. Shortly after being published, the novel was recognized by the prestigious "Junior Library Guild". Tom Crosshill mainly writes scinece fiction and fantasy and many of his short stories are available in various fiction magazines online in English. “The Cat King of Havana” will soon be available in Latvian, Spanish, French and Russian. 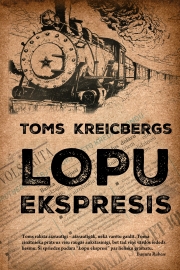 The Cattle Express is a contemporary Latvian author’s effort to pinpoint both his personal identity and a universal human one; he seeks to combine both into a coherent whole. Two plotlines run parallel in this text: the first takes place in Latvia in the first half of the 20th century; the second, in 21st-century New York City. Crosshill’s story of occupation, deportations, war, and the authoritarian regime of Kārlis Ulmanis – the first Latvian Prime Minister – runs side by side along a tale of the modern world of Wall Street – which comes with a promising life full of possibility. 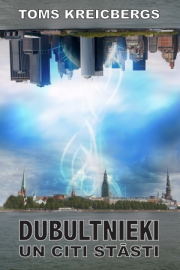 The collection Seeing Double and Other Stories was published in Latvian in 2011. It contains 13 of Crosshill’s stories, including 2011 Nebula nominee “Mama, We Are Zhenya, Your Son” and 2009 Writers of the Future winner “Seeing Double.” From quantum mechanics to flying pigs, from hive minds to passenger dragons, from time travel back to the USSR to a future where Russia rules the Baltics, Crosshill’s tales span numerous settings and genres.

“Seeing Double and Other Stories isn’t the first sci-fi short story collection in Latvian literature. It’s special, though, because it simultaneously is and is not traditional science fiction. The author touches on a number of themes that have often come up in both literature and movies during the science fiction boom of the last fifty years—mostly outside Latvia. These themes include future-era people under the control of technological achievements, A.I. trying to be just like humans, the paradoxes of time travel, and a creator’s responsibility for his creations. In his stories, [Crosshill] skillfully uses a technique I like to call the crooked mirror, or multi- faceted prism approach. By changing the angle from which we look at an object or event, he gives a grotesque slant to our point of view. This slant reveals the object to us from a very human, intimate perspective.” – Bārbala Simsone, literary critic.

About The Cat King of Havana // Harper Collins Publishers, 2016 [EN]

About The Cat King of Havana // Publishers Weekly [EN]

2014, Nebula Award nominee for Best Novelette of 2014, for The Magician and Laplace’s Demon